"The state-of-the-art wind turbine you see before us is the focal point for the largest and most significant government-industry wind power R&D project ever to be undertaken," NREL Director Dan Arvizu said. "Under the cooperative research and development agreement we have in place, Siemens Energy, NREL and the U.S. Department of Energy will put this 2.3 megawatt turbine through all of its paces, in all kinds of conditions, in a rigorous testing regime that will continue for a minimum of three years, at a shared cost of $14 million."

NREL's Arvizu was joined at a turbine commissioning event by executives from Siemens and the U.S. Department of Energy (DOE), as well as Colorado Gov. Bill Ritter, who lauded the latest partner to join NREL's clean energy research portfolio.

"Siemens joins an inspiring list of visionary companies that are becoming part of Colorado's New Energy Economy," Ritter said. "Together, with public and private partners like these, we are leading America toward a new, cleaner and more secure energy future." 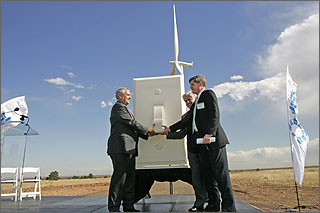 The Siemens 2.3 MW turbine is among the largest land-based turbines deployed in the marketplace. As visitors sat below the massive 331-foot-diameter rotor resting atop a 262-foot tower, event speakers noted the primary objective for the joint NREL-Siemens research is to better understand the aerodynamics of these new, larger-land based machines. Under the CRADA, teams will test the turbine and its features for a minimum of three years involving a full range of real-world operating conditions, including severe weather. To split the cost of the $14 million research program, Siemens will contribute $9 million and NREL $5 million.

"At Siemens, innovation is one of our core values. That's why we are especially pleased to join forces with our nation's leading wind research facility," Senior Vice President of Siemens Energy Barry Nicholls said. "This important new research program will help us further enhance the performance of our turbines and lower the cost of clean, wind-generated power, which in turn will help diversify the overall mix of power generation sources in the U.S."

New Technology to Be Put through the Paces

NREL engineers began installing the massive turbine this summer. Although similar to turbines currently being used to generate power, the Siemens wind turbine at the NWTC is a late-stage prototype that features a new blade designed to capture more of the wind's energy without increasing the loads that can cause wear on the other turbine parts.

The turbine also is fitted with many instruments that will provide turbine performance data including: 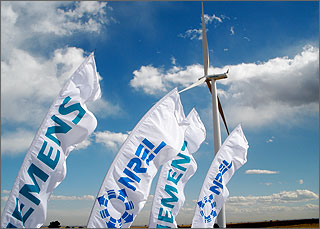 The new turbine will allow NREL to take a significant step forward in generating its own clean electricity. The Siemens turbine coupled with a recently installed 1.5 MW GE turbine will allow the NWTC to generate more electricity than it uses. DOE and Xcel Energy are negotiating an agreement for surplus energy to be exported and sold to the local utility grid.
Credit: George Douglas

"This is the best place in the world (for these kinds of tests), this is the hot house of aerodynamic and atmospheric research," Siemens Chief Technology Officer Henrik Stiesdal said. "We want pressure and blade variations (data) as it rotates; we want it to be beaten up here. This … will enable us to reduce the cost of energy."

CRADA partners believe the research will support the wind industry's efforts to enhance the reliability and performance of utility-scale commercial wind turbines. If this is achieved, it will enable the industry to improve its manufacturing processes — another factor that will help continue bringing down the price of wind energy.

"Colorado has the leading corridor for renewable energy R&D in America and the world. And I know this is true because no one has openly disagreed with me," Gov. Ritter said, smiling. "Our energy future is transforming beneath our feet. Our children and grandchildren will produce and consume energy far differently than we do today."

In addition to the turbines themselves, NREL researchers are studying the foundations needed to support large wind turbines. NREL and Renewable Energy Systems Americas (RES) have entered into a separate but coordinated agreement to examine the design and performance of turbine foundations, with goals of increasing the reliability of non-turbine components. This will also help reduce turbine installation costs.

The new turbine and other new projects underway at the NWTC will allow NREL to take a significant step forward in generating its own clean electricity. The laboratory has aggressive sustainability goals — including the reduction of greenhouse gas emissions while at the same time meeting the energy needs of NREL's expanding campus. The Siemens turbine coupled with a recently installed 1.5 MW GE turbine will allow the NWTC to generate more electricity than it uses. DOE and Xcel Energy are negotiating an agreement for surplus energy to be exported and sold to the local utility grid.

Another important goal for the turbine research project is to help policy makers better understand how we can generate 20 percent of the country's electricity from wind over the next 20 years.

"Last year, NREL worked with the Department of Energy to publish the most comprehensive examination of wind power potential in the United States," Arvizu said. "The study for the first time demonstrated that it's feasible to produce 20 percent of our nation's electricity needs from wind energy. And that is a crucial understanding — because achieving 20 percent wind energy will create hundreds of thousands of jobs, dramatically reduce our greenhouse gas emissions and help free us from our dependence on foreign fuel supplies."

Arvizu also noted that with NREL's participation in these types of CRADAs, the lab will help position the United States as a leader in developing the most advanced wind turbines in the world.

The NREL-Siemens CRADA is part of a coordinated wind research program supported by DOE's Office of Energy Efficiency and Renewable Energy. Learn more about wind energy research at NREL and the feasibility of using the wind to generate 20 percent of the nation's electricity by 2030.