Walking into a building constructed before the days of heating systems and air conditioning, such as a southwestern adobe, still elicits a sense of comfort and coziness. The concept of using thermal mass in walls to help maintain the temperature of a building is not new. And now, this tried and true method is being used to regulate comfort systems of NREL's Research Support Facilities (RSF), one of the most energy efficient buildings in the world.

"In this case, the exterior skin of the building is doing more than just keeping the weather out," Philip Macey, project manager for RNL, the design firm for the RSF, said. "Precast panels installed as the walls are actually part of the heating and cooling system for the building.

"All of these ideas are based on principles that have been really tried and tested," Macey said. "They just haven't been used in an office building in modern times — till now."

The RSF is under construction at NREL's South Table Mountain Campus near Golden, Colo., and is designed with a myriad of energy saving features, such as the precast exterior panels, which play a lead role in maintaining the temperature of the building's interior spaces. These energy efficient practices will be shared with, and, it's hoped, replicated by commercial builders across the country.

It's Cool and Quiet… Too Quiet? 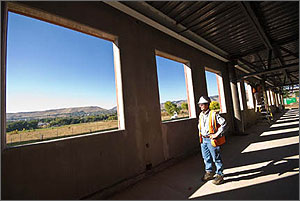 One side of the RSF's pre-cast panels serves at the interior wall of the building. The walls will receive the typical coats of paint and primer, but the underneath surface is what will show through to the occupants.
Credit: Pat Corkery

Another advanced feature in the RSF is how the windows also help regulate the inside temperatures. During warmer summer nights, the windows will automatically open to vent excess heat and allow the cool night air to naturally bring down the temperatures inside the office space. As the night progresses, the six inches of interior exposed concrete in the pre-cast panels of the RSF will lose their heat, cool down, and the process begins anew the next day. It's the same thing that happens in brick homes," Macey said. "During the day it's comfortable inside but if you don't open the windows at night, suddenly it can be 80 degrees inside and you wonder how that happened." To help augment this system during warmer summer days, the building also has an underground concrete labyrinth that can store cool night air for later use.

So, unlike most commercial office buildings, the new RSF doesn't rely on a traditional forced air HVAC system and uses much more outside air inside the building. According to NREL's Project Manager, Eric Telesmanich, this is possible because 95 percent of the work spaces don't have ceilings. Employees will assist the natural ventilation flow by opening and closing windows as necessary. They will also have the ability to control the amount of ventilation delivered to their work space through an under floor air distribution system when the natural ventilation is not enough.

In fact, the lack of a traditional forced-air system throughout most of the building means that it will be very quiet. Without the constant sound of moving air, the building will employ white noise to help mitigate background chatter that will take place in such an open office.

"What a great environment this will be for the employees," Erick Hartzell, RSF project manager for Haselden Construction said. "It's going to be the best possible environment to spend an eight to 10 hour day."

"Thermal comfort studies show that the most comfortable spaces are the ones that don't have drafts that push the air to control the temperature," Macey said. "Everything in the RSF will take on that even temperature."

Panels Play on Both Sides 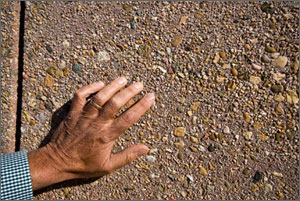 Environment also is a concern when it comes to the materials used in constructing the RSF. This includes the precast panels, which were fabricated in Denver. All of the concrete and aggregate used to make the panels is also from local sources within Colorado.  Although the panels come in various sizes and shapes, on average, they measure 13 x 30 feet. Two hundred and eight have been installed on the RSF.

The panels did present a challenge to the Haselden crews during installation. Workers had to be very careful when lifting the large panels into place because unlike typical siding on buildings, these panels make up the entire wall of the building, both exterior and interior. "The panels are the finished wall on the inside as well as the outside," Hartzell said. "We've had to be very careful installing them because there is a huge finished surface that will show any blemishes. In addition, the whole thermal component of these walls was important during installation. You can't just put an anchor bolt anywhere you want into the wall, you have to be aware of how it will affect the heat loss for the building."

The interior walls will receive the typical coats of paint and primer, but the underneath surface is what will show through to the occupants. Colors also will be carefully selected with many of the precast walls being painted white to help with day lighting the interior work space. And, since the windows play a role in lighting and cooling the building, they are plentiful. "No one will be farther than 30 feet from a window in the RSF," Macey said. "The scale of the windows and the connection they bring to the outside environment is something I think people will notice most."

Haselden Construction and RNL are building the 218,000 square-foot Research Support Facilities building, which is designed to be a model for sustainable, high-performance building design, and will provide U.S. Department of Energy-owned work space for administrative staff who currently occupy leased space in the nearby Denver West Office Park. The RSF is planned to achieve a LEED® (Leadership in Environmental and Energy Design) Platinum designation — the highest benchmark awarded by the U.S. Green Building Council. Construction on the RSF is expected to be completed in summer 2010.

Learn more about Sustainable NREL and the RSF.

The next story in this series on the construction of the RSF will take a deeper look at the many energy efficient qualities the windows bring to this one of a kind office building.