When researchers from the U.S. Department of Energy's (DOE) National Renewable Energy Laboratory (NREL) and Savannah River National Laboratory (SRNL) participated in a test drive for a hydrogen fuel cell SUV that reached the equivalent of a 431-mile driving range, it wasn't just California dream. The research team, along with Toyota, recently completed a 331 mile round trip drive between Torrance and San Diego, Calif., driving two Toyota Highlander Fuel Cell Hybrid Vehicles — Advanced (FCHV-adv). And, with the fuel remaining in the tanks, those SUVs easily could have crossed the 400 mile mark.

Toyota Motor Engineering & Manufacturing North America, Inc., along with NREL/SRNL entered into a Cooperative Research and Development Agreement (CRADA) with the sole objective to determine the real-world driving range of the FCHV-adv.

"The main thing was the driving range of the vehicles," said Keith Wipke, NREL Senior Engineer and Group Manager for Hydrogen Analysis. "We were basically showing that using today's technologies, you can achieve above 400 miles, or more, of real-world driving using a hydrogen fuel cell vehicle. It was exciting and surprising to see such high fuel economy for an SUV."

Although hybrids like the Toyota Prius currently get lots of press for helping Americans use less oil, hydrogen also holds great promise. NREL and SRNL researchers verified that the two FCHV-advs used during the driving test achieved an estimated range of 431 miles on a single fill-up of compressed hydrogen gas. The average fuel economy came out to the equivalent of 68.3 miles/kilogram of hydrogen (equivalent to mpg for gasoline-powered cars). And, the only "exhaust" from these eco-friendly vehicles is H2O (water). 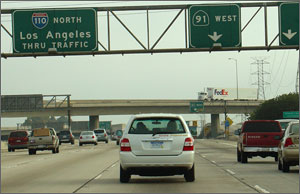 A California Rush and then Coast

The day before the big ride, researchers visited Toyota's headquarters to watch the Highlanders being fueled up. The next morning saw the start of an 11-hour trek to verify the Highlander's driving range and efficiency. The evaluation began at 8 a.m. - during the peak of California's morning rush hour.

Crews started the trip at Toyota's headquarters in Torrance, which is just south of Los Angeles. Each vehicle had one driver from the vehicle manufacturer, a scientist from NREL or SRNL, and equipment to log data along the way. Drivers headed north then west to Santa Monica, and down along the coast to Redondo Beach for the first rest stop. The next leg went from Redondo Beach to Dana Point, and the final leg went from Dana Point south all the way to San Diego. They took the same route back after lunch.

"Because of the California traffic, which was heavy for much of the time in the morning and evening, the trip took longer than originally planned," Wipke said. "But the situation definitely matched the real world evaluation we were after, with a mixture of driving conditions."

To mimic a typical commuter's drive, the route included highway driving and stop-and-go traffic. The maximum speed during the test route reached approximately 75 mph with an average speed for day that was approximately 30 mph. The actual range for the vehicles was calculated by using the 331.5 miles covered during 11 hours driving, plus 99.5 miles of additional range calculated from the average fuel economy from the day multiplied by the remaining usable hydrogen. Driving range results were independently calculated for each vehicle, and these results averaged together to achieve the final 431-mile range estimate.

Although the idea of using hydrogen as fuel for your SUV or car may conjure up worries of the Hindenburg, today's hydrogen fuel cell vehicles are safe. The tanks used to store the hydrogen are well constructed and the fueling stations are easy to use and similar in design to modern gas stations.

In fact, one characteristic of hydrogen actually makes it safer to use than gasoline. "Hydrogen can be safer than gasoline because it is significantly lighter than air," Wipke said. "In the rare event that you do have a leak in your tank, the hydrogen will disperse quickly and not pool on the ground around a vehicle as gasoline does." 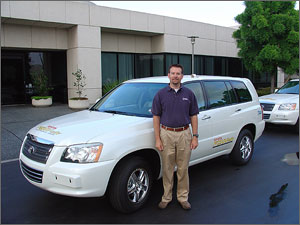 NREL Senior Engineer and Group Manager for Hydrogen Analysis Keith Wipke spent 11 hours in the FCHV-adv observing the range and fuel efficiency of the vehicle as part of a CRADA with Toyota.
Credit: Keith Wipke

for DOE verifying range results and estimated miles per gallon. Wipke and the crew were able to see exciting initial results during the evaluation. "We were able to see the data displays in the vehicles as we drove. It was really neat to see the data play out in live action, and it gave us a strong indication that the range would be high right from the start," Wipke said.

The teaming of Toyota and NREL for this type of evaluation is a natural match. "The analysis will help regulators and government research programs accurately assess the status of the fuel cell industry and viability of the current technology," Toyota Technical Center Advanced Power Train Engineer Jared Farnsworth said.

NREL has six years experience in working with automotive companies and their fuel providers to evaluate the on-road performance of hydrogen fuel cell vehicles as well as the needed refueling infrastructure through DOE's Learning Demonstration. The Learning Demonstration encompasses 140 fuel cell vehicles and more than 20 refueling stations and has accumulated more than 2 million miles traveled. 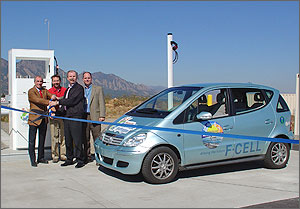 NREL Makes its Own Fuel

Although NREL researchers didn't get to bring the FCHV-adv back to the lab for further testing, they did come home to the commissioning of a new Hydrogen Fueling Station that can fill hydrogen fuel cell vehicles being tested at NREL.

The new station is part of NREL and Xcel Energy's Wind to Hydrogen (Wind2H2) project. Wind2H2 uses wind and solar energy to generate electricity. That electricity is then used to split water into hydrogen and oxygen. The hydrogen is compressed, stored in large steel tanks and later converted back to electricity or dispensed into fuel cell cars or used to generate electricity using a 50 kilowatt internal combustion generator. A 5 kW fuel cell will be installed later in 2010 that will be integrated with wind and solar sources for testing of hybrid power systems.

"Since our project uses wind and solar electricity directly from the sources — without sending it out to the utility grid first — our hydrogen is some of the 'greenest' in the world," NREL Senior Engineer Kevin Harrison said.

Because the station is part of a larger Wind2H2 research project the hydrogen created isn't used solely to fuel hydrogen cell vehicles. However, NREL is interested in partnering with companies and agencies that may be placing hydrogen vehicles in their fleet in the future and need a place northwest of Denver to fill-up. With a large concrete pad and lots of wind and sun at the site, the station can even accommodate hydrogen buses up to 40 feet in length. To accommodate bus fueling new high pressure tanks will be installed at the Wind2H2 site during the spring of 2010.