An exclusive state-by-state analysis by the U.S Department of Energy's National Renewable Energy Laboratory shows that clean energy development is spreading rapidly throughout the country, often in conjunction with public policies designed to spur such growth.

By 2007, 24 of the nation's 50 states were generating at least 1 gigawatt of renewable electricity from non-hydro sources, according to the 2009 NREL State of the States report

While states such as California and Texas with abundant resources continue to rank among the leading states in terms of total renewable electricity generation, the study shows that a range of other states are demonstrating strong growth in the clean energy sector, including those with historic fossil fuel legacies, such as Oklahoma and Illinois.

Wind energy accounted for the largest percentage of nationwide growth in renewable generation between 2001 and 2007, including a 30 percent increase in 2006 and 2007. 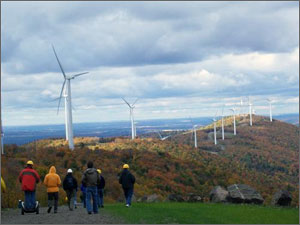 Clean energy projects in Maine such as the 42-megawatt Mars Hill wind farm help the New England state rank first in the nation in some renewable categories, according to NREL's 2009 State of the State report.
Credit: Skip Babineau

The 212-page report contains 101 charts dissecting major renewable energy technologies and policies, as well as an extensive appendix listing clean energy resources. While the report provides state-by-state comparisons, NREL authors said the report is not meant to be a renewable energy scorecard.

"This is the only report that looks at data from every state and attempts to quantify the links between renewable energy development and policy implementation," said NREL Senior Energy Analyst Joyce McLaren, who led the report team.

"Of course, it's interesting to know where and how much wind energy is being produced, but knowing that alone isn't going to help move you forward," McLaren said. "This report tries to identify how states are moving forward and which mechanisms are the most effective and efficient." 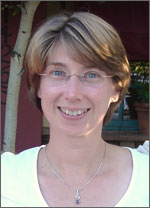 All but 14 U.S. states now have adopted renewable energy portfolio standards or goals. And, all but seven states have net-metering policies in place, which allow customers who generate their own electricity to send surplus power back to the grid and have it subtracted from their retail electricity use.

State policymakers who commented on the project in its draft stages said they were impressed by breadth and scope of the final report. Knowing what is taking place beyond your own state's borders can be influential, they said, even when one state's renewable energy resources are different from another's.

"In recent years, our energy committee has been dealing with questions that are hyper-local, such as whether we should consider including wood from construction and demolition as a renewable resource for purposes of our renewable portfolio standard," said Kevin McCarthy, principal analyst for the Connecticut General Assembly's Office of Legislative Research.

"This report puts much more information at our fingertips and allows us to take a much broader view," he said.

McLaren said certain policies appear to be working particularly well in combination. For example, more renewable energy has been developed in states that require utilities both to disclose their fuel mix and offer customers the option to purchase electricity produced with renewable fuels.

States that have a renewable portfolio standard appear to be generating more clean wind energy the longer the RPS has been in effect.

States that implemented net-metering legislation in 2005 had significantly more renewable energy generation by 2007 than states without such a policy. The analysts looked back in time in order to identify development trends and make the link between past policy implementation and current development. However, McLaren cautioned that the reliability of the conclusions will be strengthened if future analyses identify the same trends.

"It's when we see the same thing every year for three or four years that we can be confident in the result," she said. "As the renewable energy field continues to develop, connections between policy and the ensuing development will only become more evident."

The report also contains an extensive list of resources with online links to renewable energy information, maps, research centers, industry associations and related information from NREL and other institutions. 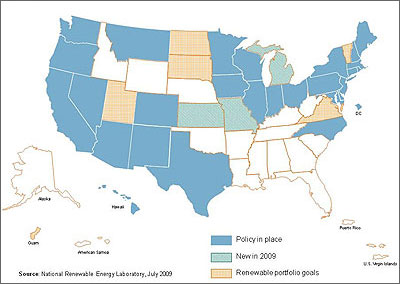 States that have a renewable energy portfolio standard appear to be generating more clean wind energy the longer the RPS has been in effect.
Credit: NREL