NREL Breaks Down Walls for Biofuels

Researchers at the National Renewable Energy Laboratory (NREL) and ethanol producers are racing to come up with ways to make ethanol from cellulosic biomass that are cheaper and easier to produce than current methods. But they are hitting a wall. Cell walls in plants are making the production of cellulosic ethanol a challenge. So researchers are creating their own computer program to help model and break down the tiny fibers of cellulose — or fibrils — found in plant cells.

Although ethanol is becoming more available to consumers, NREL is working closely with the U.S. Department of Energy (DOE) to meet a quickly approaching goal to produce competitively priced ethanol for $1.50 per gallon by 2012. Why the rush? DOE believes this is the price at which ethanol will be able to go head-to-head with gasoline while the U.S. strives to reduce our dependence on oil. In addition, the Energy Independence and Security Act of 2007

requires that the U.S. use 15 billion gallons of renewable fuels by 2012. All of this means the U.S. needs to find ways to make more ethanol and fast. To help accomplish this goal, NREL researchers are looking at how to make cellulosic ethanol a cheaper, quicker reality. Download Adobe Reader.

"To reduce the cost of cellulosic ethanol we must understand how to break down the plant cells into the sugars needed to make ethanol," NREL Researcher Antti-Pekka Hynninen said. "The cellulose fibrils of these plants are very long so we use computer modeling to see how we can break them apart." 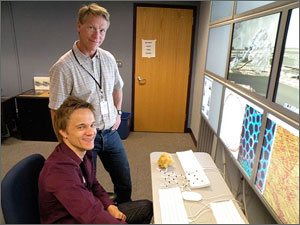 Cellulosic biomass contains sugars that are much harder to get at because the plants use these tougher plant cells as structure to hold up the plant. NREL's Antti-Pekka Hynninen and Mark Nimlos are part of a team creating their own computer program to help model and break down the cellulose fibrils found in plant cells
Credit: Alec Brewster

Currently, there are no ethanol plants in the U.S. that distill ethanol using the non-edible parts of plants such as corn stalks, grasses or wood chips. All commercially available ethanol is made the "easy" way using starchy products such as corn kernels because starches are much easier to break down and convert into the sugars needed to make ethanol. Cellulosic biomass contains sugars that are much harder to get because the plants combine the sugars into cellulose fibers and use these tougher fibers as structure to hold up the plant and protect the cells from outside attack— and in the case of woody biomass, it's the very cell structure that leads to the slow deterioration of wood.

"Cellulose is grouped in bundles and gives the plant cell walls their strength," Principle Scientist Mark Nimlos said. "We need to learn more about how they are grouped and attached to the plant cell walls so we can take it apart to make more ethanol that's cheaper and requires less energy to produce."

NREL researchers typically study cellulose fibrils that are 500 to 1,000 glucose units long and figure out with easiest way to bust them apart. However, these fibrils are too large to study using current computer models.

"Right now the technique is to consider each atom in each fiber, which is not practical using existing computers," Nimlos said. "We need to group atoms into beads, or larger grains." 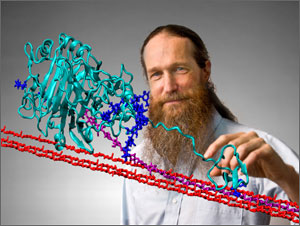 NREL hired Hynninen earlier this year. He has a Ph.D. in physics from Utrecht University in the Netherlands. Hynninen hopes to overcome the problem presented by such large molecules by building a simpler "coarse-grained" computer model of cellulose fibrils. In the new approach, multiple atoms (typically 3 to 7) are grouped into a single spherical bead. The coarse-grained model is then built up from these beads. The new model is expected to allow computer simulations that are 10 to 100 times faster.

"The big question that we will need to answer is how to define the forces between the beads," Hynninen said. "Those forces must be equal to the forces acting in the atomistic model. At the moment, our work is centered on building the software tools that map those atomistic forces onto the coarse-grained model."

"The key here is how to get rid of the details and keep the overall picture," Senior Scientist Mike Crowley said. "We can't model every detail of every atom. Think of modeling the collision of two cars. When studying the force of the collision, you don't examine the pistons in the engine, you look at just the vehicle even though it's made of many parts. We need to look at larger segments to model the cell overall. Sounds simple, but it's very tricky."

The idea of something being "tricky" is motivation for Hynninen and makes him a valued member of the NREL team. "Antti-Pekka's programming expertise means he sits down and writes a program needed without being restricted by existing software," Crowley said. "He's a maestro who can make a computer do what he needs it to do."

Hynninen's view of his work is more mathematical. "My goal is simply solving a problem that has some impact on our lives and makes a difference," he said. "This is a nice example of applied science working on real problems and goals we need to meet."

Next steps for the program officially titled "Meso-Scale Computational Modeling of Polysaccharides in Plant Cell Walls" are to validate the model and publish the work done at NREL so this type of modeling can be used in other areas.

"I believe this same method could be used for other systems and they don't have to be cellulosic or proteins — there's a potential for many uses." Hynninen said.