NREL Sets the Bar for Office Building Energy Use 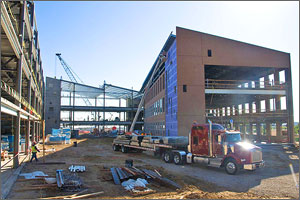 Technology — from sophisticated computer modeling to advanced windows that actually open! — will help the newest building at the U.S. Department of Energy's National Renewable Energy Laboratory be one of the world's most energy efficient offices.

But making NREL's new Research Support Facility into a showcase for engineering net zero energy office design didn't begin with rooftop solar panels on its distinctive "lazy-H" shape, or a subterranean "thermal labyrinth" that mimics a cave to help heat and cool the building– although the RSF will, in fact, use both sustainable strategies.

Nor did it start with aggressive window shading and advanced light reflecting devices to simultaneously provide daylighting and passive heating – although both systems are vital to the building's performance.

The RSF's origins as an intended symbol of energy efficiency goes back more than a decade to when DOE proposed an administrative facility setting the national standard for energy efficiency and can be traced in the project's exhaustive specifications document to a single number in section 8. 2 on page 10:

How little energy is 25,000 Btu per square foot per year?

By comparison, conventional office buildings built over the past 30 years typically use three times more energy than required in the RSF. That's like taking a 1980s-era family sedan and demanding that it get 60 mpg.

It's even aggressive by new construction standards. The NREL requirement is 50% more energy efficient than the new commercial energy code issued by the American Society of Heating, Refrigerating and Air-Conditioning Engineers (ASHRAE).

And, the energy intensity figure is a requirement over and above the additional requirement that the RSF be built to LEED Platinum status, the highest designation by the U.S. Green Building Council.

The number was not chosen arbitrarily. Researchers from NREL's Buildings Research and Development program performed computer simulations and collected data from high-performing buildings nationwide to create an energy specification that could be met within the project's budget, yet set an ambitious new energy efficiency benchmark for the nation.

A First Time for Everything 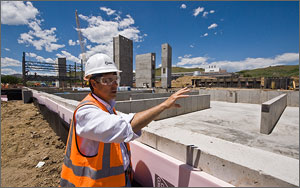 RSF project manager Carl Cox points out key features of the RSF's foundation. A subterranean air handling network will help to naturally heat and cool the building. It's one of dozens of features that, when combined, will enable the building to be one of the world's most energy efficient office buildings.
Credit: Pat Corkery

Energy use intensity rarely is quantified in a building contract, even when project is designed to be a "green building." And never before, researchers say, has such an aggressive energy savings requirement been demanded up front in the contract long before groundbreaking.

"We set the energy efficiency requirement and everything in the RSF has cascaded from that number," said Ron Judkoff, manager of NREL's Buildings Research program.

"It is an unprecedented target and dominant design criteria," Judkoff said. "It required all of the players in the project to commit to real energy efficiency. When you are trying to go that low, an integrated design approach is needed."

The RSF is under construction at NREL's South Table Mountain Campus near Golden, Colo. The RSF will be a 219,000 square foot facility supporting more than 800 Laboratory staff, along with an energy efficient information technology data center. It is scheduled to open in summer 2010.

Researchers say its design features will be shared with commercial developers in hopes it will be replicated as local conditions allow and without, as the researchers put it, "doing architectural gymnastics."

"The Department of Energy's goal was to make this a showcase for energy efficiency, and that's what drove the design of the Research Support Facility," said Jeff Baker, Director of Laboratory Operations at the DOE Golden Field Office. Nineteen percent of the country's energy is used in commercial buildings, he said.

"The DOE expects the RSF project to help reduce the nation's energy consumption by changing the way commercial buildings are designed and built," Baker said. "Where better to demonstrate what can be done than on the campus of the Department's primary national laboratory for renewable energy and energy efficiency research and development?"

Buildings Can Do a Lot Better 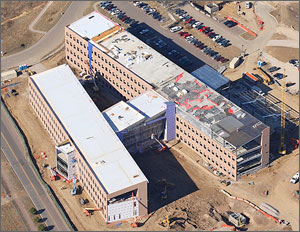 The "lazy H" configuration of two narrow multi-story office wings connected by an enclosed bridge and courtyards allows daylight to penetrate the RSF's work spaces. NREL recommended that the office wings be no wider than 60 feet across rather than a typical 120 feet.
Courtesy of Haselden Construction

NREL's buildings R&D group has influenced the design of the Laboratory's facilities for more than two decades. Many of the campus buildings are among the most energy-efficient of their kinds, including the Thermal Test Facility, the Science & Technology Facility, the Solar Energy Research Facility and the Visitors Center.

Researchers had already studied the energy use of newer commercial buildings around the country. While some of them, such as the Chesapeake Bay Foundation's headquarters at the Merrill Environmental Center

in Annapolis, Md., had been awarded LEED Platinum status, they still did not emphasize energy efficiency as much as NREL researchers thought they should.

Since RSF construction began last spring, the Laboratory continues to grow rapidly. Because of its modular design that eschews structural columns, the interior has been creatively rearranged to accommodate nearly 100 additional staff. But more people require more energy, and so the energy use requirement for the office space has been nudged to 31.75 kBtu/sf/year.

Then came the large new data center, vital to the Laboratory's significant and growing computational needs, but more than what a typical office building would include.

Data centers usually have voracious energy appetites. But this late addition still had to fit with the RSF concept.

Researchers came up with a combination of evaporative cooling, outside air ventilation, waste heat capture and more efficient servers to reduce the center's energy use by 50 percent over traditional approaches.

Because the data center serves the entire Laboratory campus and not just the RSF, an energy allowance was added to reflect the exception to the project. Now the RSF energy use intensity including the data center is 35.1 kBtus/sf/year. That's still better than most of today's energy efficient buildings and well under half the energy used by a similar building built to code for the same budget.

When the $64 million project was first reviewed by RNL Design and Haselden Construction, architect Phillip Macey admits he did not immediately recognize how aggressive the energy use requirement was. But it quickly became the project's fundamental characteristic — so primary, in fact, that RNL and Stantec, the project's engineers, drafted an energy model that acted as a starting point for the building's form.

"The energy use requirement told me that energy was going to drive the architecture," Macey said. "It is an old concept in architecture that the building form should reflect the climate in which the building is located."

He compared the energy requirement to finding a key and figuring out which door it unlocked.

"That 'locked door' is the entry to the zero energy room," Macey said. "We knew that if we could find a way to get to that energy level it would likely unlock the zero energy door for the entire building."

Many Steps to Energy Efficiency

Architects and engineers incorporated hundreds of strategies and technologies that combine to save energy by emphasizing daylighting and natural ventilation.

Some involve the building's largest and most pervasive systems:

But it still wasn't enough. Many smaller decisions were made with energy efficiency in mind to reach the final calculation. NREL researchers and the design team found savings in every aspect of the building's use.

Delivered at a Competitive Cost

Comparison of Buildings Energy Use Intensity:

The RSF is a "design-build" project in which the team will deliver the advanced building for a market-competitive price of about $280 per square foot. That's another first for the project: Laboratory researchers had to set their requirements for the building's performance up front and have relatively few opportunities to make changes later.

So when the specifications were completed, the RFP ran a staggering 780 pages. That's longer than Homer's epic poems, The Iliad and The Odyssey — combined.

But that exhaustive detail is meant to provide building owners and developers a proven method for net-zero energy office buildings.

Haselden Construction and RNL are building the 219,000 square-foot Research Support Facilities building, which is designed to be a model for sustainable, high-performance building design, and will provide DOE-owned work space for administrative staff who currently occupy leased space in the nearby Denver West Office Park. The RSF was designed by RNL. Stantec Consulting served as the project's engineering, energy modeling and sustainability consultant.

Learn more about Sustainable NREL and the RSF and see a video on NREL Buildings Research.