As the market for clean solar power rapidly expands, NREL researchers are investigating advanced concepts in concentrating solar power (CSP) with $5.4 million in American Recovery and Reinvestment Act funding awarded from the U.S. Department of Energy.

CSP uses mirrors to reflect sunlight onto receivers. Unlike photovoltaic cells that directly convert sunlight into electricity, this method uses the sun's heat to drive a generator to produce electricity.

Key to CSP's commercial success is developing an economical, effective energy storage capability that will hold the sun's heat for use to generate clean electricity at periods of peak power demand, or during cloudy weather or at night.

NREL is studying new thermal storage materials and technologies that will allow CSP plants to work at higher temperatures and greater efficiencies, while lowering the cost of energy produced by these systems.

DOE's goal is to make CSP cost-competitive by 2015 and provide a sizeable amount of clean energy to the grid by 2020. 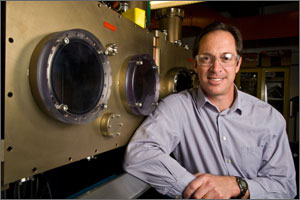 Mark Mehos, manager of the concentrating solar power program, says much of the ARRA funding for the CPS program will be spent on new facilities to improve thermal storage and other CSP technologies.
Credit: Pat Corkery

CSP plants are generating about 600 megawatts of electricity today, mostly in the United States and Spain. An additional 1,000 megawatts are under construction by utilities in sunny regions such as the desert Southwest.

In the U.S., an additional 8 gigawatts of CSP are being planned. Internationally, a similar level of CPS development is underway.

NREL and Sandia National Laboratories are funded by DOE to develop CSP technologies.

"The industry needs performance and durability data in everything from materials to systems," he said. "And on the R&D side, these new facilities will help us develop the next generation of materials and systems."

Department of Energy funding will be used in four important areas:

Economically storing thermal energy for generating electricity during peak utility load periods is vital if CSP is going to help meet clean energy demand. Mehos said this new facility would include two test units — one 15 kilowatt and the other 100 kilowatt — to evaluate advanced CSP heat transfer fluids and thermal energy storage methods. The lab will test concepts being developed through grants awarded to industry and universities for developing advanced fluids and storage concepts. 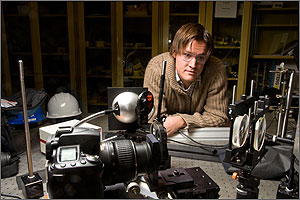 NREL's existing advanced optical materials laboratories develop and test new lower-cost, durable optics and coatings for mirrors and receivers. Weatherization chambers currently expose a large number of advanced reflector materials under accelerated conditions of ultraviolet light, temperature and humidity. An advanced deposition chamber is being used to develop advanced reflector and absorber coatings. A diverse set of optical characterization equipment is used to evaluate the optical properties of advanced materials. Currently NREL has three laboratories located in the Field Test Laboratory Building doing versions of this work. A portion of the funding will be used to expand the capabilities within each of these laboratories.

NREL researchers already have worked with one CSP company, Sky Fuel of Albuquerque, N.M., to develop a film-based optical coating on an aluminum parabolic shaped substrate to replace heavier, breakable glass mirrors. That development won a 2009 R&D 100 award. "Sky Fuel's material is the furthest along," Mehos said. "But other companies — 3M, Alcoa, Abengoa — also are looking at new materials."

Some equipment for the ARRA-funded improvements is being installed now at NREL's Advanced Optical Materials Laboratory, including four new WeatherOmeters to test mirrors and other CSP components. At $120,000 to $160,000 apiece, these advanced chambers use xenon arc lamps and other systems to concentrate sunlight at about seven times typical outdoor exposure. They also simulate the freeze-thaw cycle and other conditions.

"We can't wait 30 years to find out if the new mirrors for CSP systems will actually last for 30 years," said NREL senior scientist Cheryl Kennedy who leads the advanced materials team developing and testing reflector and absorber materials. "We do acceleration tests in these chambers that will be working 24 hours a day, seven days a week."

NREL also supports optical characterization of industry-furnished collectors and mirror facets at an indoor laboratory located at NREL's Joyce Street facility. Currently, the only practical orientation for indoor and field testing of complete parabolic trough modules has been an arrangement in which the collector axis points to the horizon.

However, rarely – if ever – does the CSP collector point toward the horizon during normal operation. Mehos said it is important to test these collectors under standard operating conditions where effects like gravity can impact optical performance. With this in mind, the funding will allow researchers to develop an overhead test configuration that will accommodate full parabolic trough module testing in the vertical position to more closely simulate real-world operations. 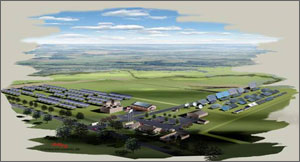 SolarTAC, as it appears in this artist's illustration, will be a unique test site for photovoltaic and concentrating solar power technologies. Ultilities and roadways are being installed now at the 80-acre site near Denver International Airport.
Courtesy of SolarTAC

This pilot-scale facility will be built 30 miles east of the Laboratory in Aurora, Colo., at the new SolarTAC. The SolarTAC site near Denver International Airport is being privately developed as a test site for industry with NREL's participation, both for large-scale photovoltaic and CSP trials. Being able to test advanced thermal energy storage systems for CSP at scale is essential to developing and deploying these new concepts commercially. The proposed pilot-scale storage facility will provide a general-purpose test bed available specifically to support DOE laboratory, industry, and university test and evaluation activities.

NREL's plans were endorsed in letters to DOE by more than two dozen corporate and university leaders in solar research.