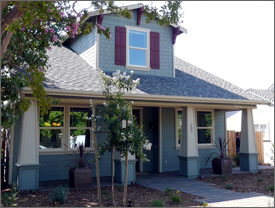 The SMUD home's traditional Craftsman exterior belies its status as one of the greenest homes in the United States.

For Sale: A new bungalow near the banks of the American River in the heart of historic Folsom, California. The environmentally friendly design cuts utility bills and peak electric demand by 80 percent, yet blends into a turn-of-the-20th century streetscape.

The 1,950-square foot Craftsman-style home was designed by RJ Walter Homes with NREL's help to be one of the greenest residences in the United States. It meets energy efficiency goals that are not expected to become required by code in California for another 12 years.

The lab and the U.S. Department of Energy's Building America program and the Building America Team Building Science Corporation (BSC) collaborated with RJ Walter Homes and the Sacramento Municipal Utility District (SMUD) on what the utility is calling the "Home of the Future." The lab's buildings research experts provided energy efficiency design consultation and helped integrate more than a dozen significant energy savings systems and features into an appealing, livable design.

Now that construction is completed, NREL will monitor the home's performance for more than a year to determine whether the design is delivering its promise of net-zero electric use and other expected energy savings.

Protecting Your Pocketbook — and the Grid 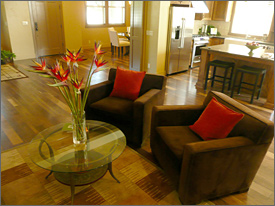 An interior view of the SMUD Home of the Future shows ample daylighting to reduce the use of interior lighting and an open floor plan to promote air circulation and even temperatures.

The home – which features three bedrooms, 2.5 baths and an in-law apartment over the 3-car garage – already is drawing accolades. Green Builder Magazine has selected it as its 2008 Home of the Year. SMUD expects it to be named one of a trio of LEED platinum certified homes in California.

"The design is definitely ahead of the curve," said NREL's Ren Anderson, project lead for Building America residential research.

"We wanted a design that minimizes residential contribution to peak electricity demands and reduces the stress on the utility's transmission capacity," Anderson said.

Compared to a typical code-built house, the SMUD home is expected to reduce energy use by 80 percent and export about 2,000 kilowatt-hours of electricity per year back to the grid — despite sweltering summers that require lots of air conditioning.

Other new homes built to California's already-stringent T24 standards have average monthly energy bills of about $140. In contrast, the SMUD home was designed to meet energy-use standards that are not expected to take effect until 2020. The eventual owner should pay no more than $24 per month in combined electric and gas bills.

"We built this house like a big thermos," said Mike Keesee, SMUD's project manager for energy efficiency and customer research and development. 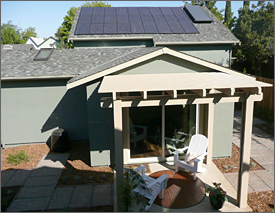 A backyard view of the SMUD Home of the Future shows a 3.85 kilowatt rooftop photovoltaic system and water-efficient landscaping.

The home's design relies on NREL's strategy of whole-building integration, where a team of experts goes beyond installing the latest materials and appliances and employs sophisticated computer models using the lab's BEopt analytical software. Long before the first shovel of dirt is turned, researchers analyze every component and system to identify potential technology gaps and barriers, and make energy analysis comparisons. Then the software integrates the best choices so that the overall building performance is optimized, while still meeting reliability and tight cost requirements.

To meet SMUD's aggressive goals, researchers and architects jointly focused on an expanded insulation package that, in Anderson's words, "keeps the heat from coming in" during inland California's long 100-degree plus summers.

They settled on a dual approach. First, they used a high-performance, 2-inch thick foam envelope for the entire house to reduce thermal bridging through the framing. The envelope is rated at R-30.

Then they reconfigured the framing to include 19-inch gaps between the studs and added depth to walls and eaves in order to both increase and extend the volume of blown-in cellulose and spray-foam insulation products to reduce drafts and leaks. The attic insulation is rated at R-38.

Such adjustments sent ripple effects through the entire design and had to be absorbed incrementally by altering dozens of plans and measurements.

The quest for energy savings took the design team into unexpected territory — such as negotiating new warranties with some of the home's two dozen suppliers because some of their products were not rated to be used under such conditions.

Note to potential buyers: The home is priced at $625,000, which is typical for the Historic Folsom neighborhood. SMUD already is evaluating at least one offer.

For more information, see SMUD Home of the Future.