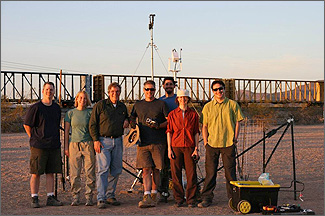 The SOLRMAP field team has successfully installed the first rotating shadowband radiometer as part of an instrumentation network in Arizona and other southwestern states. The team included NREL, Iberdrola Renewables, Windfinders  Inc. (for the wind profiling instrumentation) and DNV Global Energy Concepts (DNV) for electronics and communications support.

Under bright desert skies, a team of NREL and industry engineers has launched a new instrument network to measure the sunlight hitting the southwestern United States with unprecedented detail.

The first of four solar stations has been installed in Arizona, with several more planned in nearby states, said NREL senior engineer Steve Wilcox.

The stations are part of NREL's Solar Resource and Meteorological Assessment Project (SOLRMAP). The project is a collaboration between the laboratory and the energy industry to collect a new generation of site-targeted, long-term measurements of the solar resource in the U.S. The NREL effort is funded by the Concentrating Solar Power program.

The inaugural station was installed in Arizona in cooperation with Iberdrola Renewables, a division of the Spanish energy giant. Iberdrola already is the world's largest provider of wind energy, and operates solar power plants in Europe.

The improved information gathered by the network — known as "bankable data" — will be incorporated into computer models that industry uses to determine the most efficient locations for utility-scale solar energy conversion projects such as concentrated solar power plants.

The current data sets rely on solar measurements modeled from satellite imagery. Zeroing in on the best solar resource from the ground will sharpen the model's recommendations and potentially reduce the financial risk in such ventures, which cost hundreds of millions of dollars.

"Companies like Iberdrola need NREL's expertise because they don't have the instrumentation expertise and aren't looking to become measurement experts," said Steve Wilcox, a senior engineer with NREL's Solar Radiation research program, and the laboratory's lead in the SOLRMAP collaboration.

"What NREL gets is the best new solar data that can benefit solar research and the solar industry as a whole," Wilcox said.

The inaugural measurement station uses an Irradiance Inc. rotating shadowband radiometer. It records the strength and consistency of the sunlight in one-minute intervals during daylight hours, averaging more than 700 measurements per day. It also records wind speeds and air temperatures.

The freestanding instrument stations are independently powered by small photovoltaic panels. They transmit data automatically to Wilcox's lab at NREL. 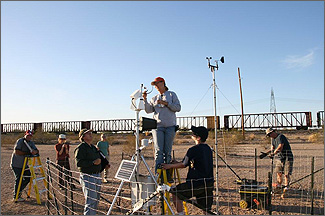 With additional funding, the network could be expanded beyond the current focus on concentrating solar thermal projects to dozens of locations in higher latitudes. In states like Maine and Montana, more precise solar data could help expand the use of rooftop photovoltaic systems, as well as inform energy efficient building design.

"Buildings people will use the data for designing heating and cooling systems and determining insulation requirements," Wilcox said. "Architects can use it to make decisions about building design and day-lighting interiors."

In addition to industrial projects, the new solar data — when collected for decades — could be used more broadly in global warming studies and climate change projections, Wilcox said.