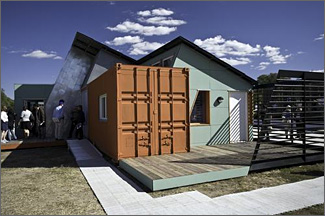 The University of Colorado at Boulder 2007 Solar Decathlon house will become the visitors' center at the Solar Technology Acceleration Center in Aurora, near Denver International Airport.
Credit: Jim Tetro

The 74-acre Solar Technology Acceleration Center (SolarTAC) is scheduled to open in early 2009 south of Denver International Airport near Interstate 70.

Energy companies and scientists will share the site to test, validate, and demonstrate new solar energy technologies, as well as fully integrated solar systems before commercial deployment. Solar energy companies also can use the facility to show customers how their systems work under real conditions.

Three private companies — Xcel Energy, Abengoa Solar and SunEdison — have committed $5.5 million over three years to develop the test bed as its original founding members, along with the city of Aurora and the Colorado Renewable Energy Collaboratory, which includes three Colorado research universities and NREL. MRI, one of NREL's governors in the Alliance for Sustainable Energy, rounds out the novel consortium.

Efforts are continuing to recruit another dozen dues-paying member companies in the next year.

The test bed is the first facility in the newly-designated Aurora Campus for Renewable Energy. Aurora offered city-owned land at no charge to SolarTAC in hopes of stimulating additional renewable energy development over the next several years.

"Our objective is to provide a highly flexible, real world test situation with dedicated, custom test sites for leading-edge companies," said Mike Pacheco, NREL vice president of deployment and industrial partnerships. He is serving as SolarTAC's acting executive director on behalf of MRI. 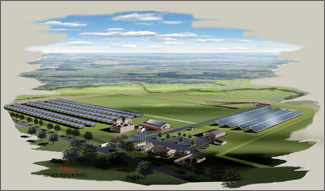 The site's initial 74 acres will be evenly divided between photovoltaic and concentrated solar power projects. Not only will the field tests include photoconversion demonstrations, but systems related to wider issues of expanding and integrating solar power at scale, including thermal storage and grid interconnect testing.

The site — currently prairie and wheat fields — provides researchers and engineers flat terrain and more than 300 sunny days a year. The site already is served by roads, water and a transmission line.

At first glance, SolarTAC appears to be a larger version of NREL's Outdoor Test Facility or a solar version of the lab's National Wind Technology Center — places where companies and scientists jointly investigate technologies and conduct performance trials.

But SolarTAC's business development model and operating agreement could not be more different.

SolarTAC will be funded by annual membership dues of $100,000 from utilities, solar technology companies and other private sector sources.

Unlike NREL facilities, no federal money is yet included in the center's development or management.

"The sponsoring companies and the city of Aurora are the stakeholders," Pacheco said. "We haven't asked the federal government to make an investment at the site. It allows the companies to be much more flexible in what they can do."

NREL and other Collaboratory institutions will contribute to individual research projects. The laboratory and MRI have helped plan and launch the facility. But NREL will not manage the center as a lab facility on an ongoing basis.

The Collaboratory's participation also enables the center to tap into renewable energy research funding from the State of Colorado. The first set of projects that combine private and state funding probably will be announced next fall, Pacheco said.

"It enables a smaller company paying $100,000 in dues to leverage millions of dollars in solar R&D," Pacheco said.

SolarTAC's construction and operations will be managed by MRI.  Burns & McDonnell Engineering of Kansas City, Mo., already has started site engineering, permitting and other work. ICM Pueblo will be the general contractor.

Abengoa will erect one of the site's first buildings and begin testing proprietary components for their concentrated solar power system within a few months.

In 2009, SunEdison will begin developing a portion of the site for testing new photovoltaic system components.

Xcel Energy will move a Solar Decathlon house to SolarTAC to serve as an office and visitors center. This entirely solar-powered building was designed and constructed by students at the University of Colorado-Boulder to enter in the 2007 Solar Decathlon.