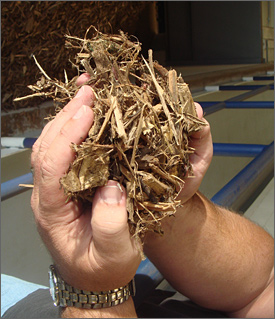 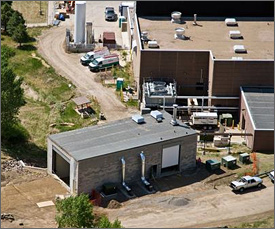 The Renewable Fuels Heating Plant, behind NREL's Field Test Laboratory Building, will displace as much as 80 percent of the natural gas used to heat the campus, offsetting 4.8 million pounds of carbon dioxide (or 2,200 metric tons of carbon) each year.

On winter's icy threshold, NREL is switching to a sustainable and efficient source of heat using wood thinned from Colorado's dying forests.

The lab will fire up its Renewable Fuel Heat Plant (RFHP) this fall as the weather gets colder. The new $3.3 million boiler facility will heat South Table Mountain Campus laboratory buildings by burning wood chips that includes trees lost to the region's mountain pine beetle epidemic.

By burning biomass from forest-thinning operations and other wood waste sources, the facility will displace as much as 80 percent of the 50,000 million BTUs of natural gas used annually to heat the STM campus.

The plant also will offset 4.8 million pounds of carbon dioxide (or 2,200 metric tons of carbon) each year.

"This project has been carefully scrutinized to deliver environmental and economic benefits," said RFHP project manager Chris Gaul, who proposed the idea of a wood-fueled plant five years ago and shepherded its construction. "It has met all of the challenges. Wood chips are NREL's best resource for large scale, on-site renewable energy."

The RFHP is behind the Field Test Laboratory Building (FTLB). New underground hot water piping connects it to the Science & Technology Facility (ST&F), the Solar Energy Research Facility (SERF), the FTLB and other campus buildings.

It played a key role in enabling the S&TF to become the nation's first federal building to achieve Leadership in Energy and Environmental Design (LEED) platinum certification for environmentally friendly design and construction methods and energy efficient operation. S&TF already had achieved a Gold rating when it was determined that the new heat source provided enough additional points in the LEED evaluation process to propel that project to the platinum rating.

The RFHP's annual heat output will increase when the Research Support Facility and other planned buildings open on the South Table Mesa campus.

Throughout metro Denver area, woodburning has been nearly eliminated to meet strict state air quality regulations. But the RFHP's ultra-efficient combustion process allows the facility to meet state requirements while burning biomass to reduce the lab's carbon footprint. The RFHP has a state air emissions permit.

The wood chips are screened to remove rocks and debris. The processed fuel will have less than 30 percent moisture content and a heat content of about 12 million BTU per ton.

Wood chips automatically feed into a combustion chamber and are roasted to the point where they are gasified. The wood gases then are mixed with air for complete combustion in the heat recovery boiler. Temperatures in the two-stage process reach 1700° F (930°C), and leave very little ash or soot.

The system uses a multiclone separator to remove 85 percent of the remaining particulates from the boiler flue gas. Inside each of the separator's multiple chambers, dual cyclones are generated to capture and spin dust particles from the gas. The particles are hurled against the walls of the chambers and fall into a hopper.

The new plant's operation is extensively automated, from fueling to ash removal. "No shovels or wheelbarrows," Gaul said. "And it won't smell like a campfire."

During cold weather, the plant is expected to burn a truckload of wood chips per day and produce 600 gallons of hot water per minute. Over a year, Gaul projects it will burn 3,600 tons of wood chips.

The plant's fuel reservoir will hold four days of wood chip fuel. The fuel supplier, A-1 Organics, is just two miles away, and operates a 1,000-horsepower wood chipper that can grind a three-month fuel supply in a single day. Existing natural gas boilers have been retained to provide replacement heat in case the RFHP encounters fuel supply or operational problems.

The project was financed under an Energy Savings Performance Contract (ESPC) between the U.S. Department of Energy and Ameresco Federal Solutions. NREL, DOE, and Ameresco developed and negotiated the details of the project structure.

Under the terms of the contract, Ameresco will bear the project's costs and purchases, provide the fuel and guarantee the plant's operation. NREL will repay the company from annual cost savings of wood over natural gas — projected in the first year to be more than $400,000. Ameresco also will perform verification analyses to ensure the plant is achieving the guaranteed energy savings.

The wood chips for the boiler cost $29 per ton or $2.42 per million BTUs — about one-quarter of the cost of natural gas.

One of the project's initial challenges was ensuring an adequate and reliable supply of wood fuel. But the mountain pine beetle, unfortunately, solved the problem.

In Colorado, many lodgepole pine forests are suffering 90 percent mortality. Beetles could leave behind as much as 60 million tons of dead trees across 1.5 million acres, according to an analysis by the Colorado State Forest Service and Colorado State University.

The RFHP is one of several renewable energy projects under development at NREL. Others include the Mesa-Top Photovoltaic System, which will be under construction through December, and several other planned rooftop and ground-based solar power projects.

For their work on the RFHP, Gaul and Phil Voss received the 2006 NREL Outstanding Team Staff Award for the RFHP. Gaul represented NREL in Washington, D.C. on Oct. 22 in receiving a U.S. Department of Energy Federal Energy Management Program TEAM award.

For more about lab efforts in sustainability, visit Sustainable NREL.