Coal can be an inexpensive and plentiful fuel in parts of the U.S., but NREL's JEDI models can reveal hidden economic benefits of renewable energy technologies.

It can be a billion-dollar decision – coal or wind? Or something else?

Public officials, researchers, consultants – even many business executives – often don't have the resources or the training to determine the economic impacts of building and operating a large energy project, and compare the benefits of a renewable energy project versus those that are fossil-fueled.

The model provides a reasonable estimate of the investment, not a precise forecast.

"There is no other tool that estimates economic impacts and is as simple to use as JEDI," said NREL energy analyst Suzanne Tegen, a manager of the modeling program.

"If you have all of the necessary inputs, it will give you an output within a few seconds." 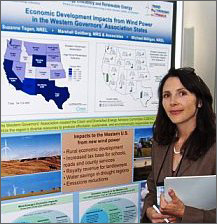 Suzanne Tegen, a NREL analyst, shared the benefits of the Laboratory's JEDI model at a recent American Wind Energy Conference.

The models are free to download, but the stakes are enormous. Demand for electricity is surging. And while coal may be cheap and wind and sun resources are free, the price of building or expanding energy facilities is skyrocketing.

A recent study by Cambridge Energy Research Associates shows that the cost of new power plant construction in North America increased by 130 percent in the past eight years. That means a power plant that cost $1 billion in 2000 would cost $2.31 billion today.

Growing demand for electricity – especially in Asia, but also in the U.S. is driving up these costs. With hundreds of new and expanded power plants being planned, the cost of raw materials such as cement, steel and copper, plus equipment, engineering talent and the weak U.S. dollar, can make an energy project too expensive to finance or the cost of its electricity too high.

How to Use JEDI

From the NREL Web site, users download the appropriate JEDI model in Excel. Then it becomes a matter of manually entering basic information about a project into the spreadsheet, such as the state, location, construction year and facility size.

Using this data, the model then estimates the project's specific costs and the economic impacts from jobs, earnings and output.

Each model analyzes a different energy source, so decision-makers have to repeat the exercise separately to compare costs and benefits according to fuel types. The estimates contained in the JEDI results are organized similarly in each model, so it is not difficult to compare the costs and benefits of, say, a coal project versus a wind project.

Tegen says it's important to use consistent information in the comparisons.

For example, don't compare the cost of a new wind farm to the local coal-fired plant built in 1980. Use data related to coal-fired construction costs today.

And, consider the capacity of each proposal. A 500 megawatt wind farm won't be the same as a 500-megawatt coal-fired plant because a coal plant operates 85 percent of the time, while a wind farm may have a 35 percent capacity factor. Instead, Tegen says, the wind farm would have to be about 1,220 megawatts, depending on local conditions.

To protect the models' accuracy, Tegen and others regularly update information such as local property taxes, commodity prices and maintenance costs.

The new fossil fuels models have been independently vetted by other government agencies and industry experts, and their accuracy has been checked by coal and natural gas developers. The models will also be tested against real projects in the U.S.

For more information on the models and their applications, visit the JEDI Web site[BROKEN LINK].