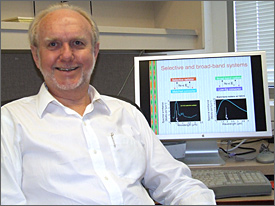 NREL research fellow Timothy J. Coutts is retiring from full-time research at the laboratory in November. A native of northeast England, Coutts launched the original photovoltaics design and modeling group at the lab in 1984.

Twenty years ago, NREL Research Fellow Dr. Timothy Coutts sat in the back of a seminar and rolled his eyes over an outlandish prediction about the future of photovoltaics.

"When it was said we were looking forward to a solar cell with 20 percent efficiency," he recalled, "I was almost giggling to myself at the absurdity."

Coutts will become NREL's second emeritus Research Fellow in November. He is astonished at the escalating efficiencies of solar cells — and a little chagrined that he ever doubted their progress.

"When I got into PV in 1970, I felt I had a very good day in the lab if I made a thin film cell with five percent efficiency," he said. "We are so much further along than I ever would've imagined."

Not the Retiring Type

Coutts will trim his NREL schedule, while continuing a research professorship in metallurgical materials at the Colorado School of Mines. He says many consultancy opportunities exist, too.

"The trick will be not to work eight days a week," he said. "I like NREL very much but I want more flexibility in what I do. I want to be able to travel when I can afford to travel, rather than worrying about budgets and that kind of thing. I don't like the idea of stopping work though."

As a teenager in northeast England, the notion of Coutts establishing a five-decade career in the forefront of solar energy research seemed as far-fetched as that prediction about solar cell efficiency.

He left high school at 16 after performing, in his own words, "shamefully" on his qualifying exams and being more interested in sports than schoolwork.

He took a job as an entry-level lab technician with the National Coal Board. Among his regular duties: making tea twice a day, polishing the lab benches and other routine chores.

"I learned self-discipline, which had been lacking, and how to work hard when necessary," he recalled.

His family expected he would soon join his father in sales. But the National Coal Board saw scientific promise in Coutts and offered to finance an undergraduate degree in applied physics. He attended Sunderland Technical College during the day and made up his work hours at night. In addition to his lab duties, he went down into the mines to collect dust samples and data for ventilation surveys.

Eventually, he conducted particle size analyses, calibrated anemometers in a wind tunnel, studied the flow properties of non-Newtonian fluids used in separating coal from stone and characterized the air-flow in the mines' underground rail networks.

In addition to applied physics, he took courses in electrical engineering.

By this time, Coutts admits, his transformation into an enthusiastic young scientist, part-time teacher and newly married homeowner left his parents pleased — if a little bewildered. He completed his Ph.D. in three years at what is now the University of Northumbria, focusing on electronic scattering processes in thin metal films.

"The coal industry gave me a fantastic training in science, although it took me many years after leaving to appreciate that fact," Coutts said. "I learned that science is everywhere."

Coutts spent the next 15 years in research positions at Northumbria, Cranfield Institute of Technology and the Electrical Research Association. His work in thin metal films expanded into a wide-ranging pursuit of solar energy and semiconductor physics. He also inaugurated the scientific journal Solar Cells.

In 1984, Larry Kazmerski — the lab's first PV researcher and now its director of Science & Technology Partnerships — invited Coutts to launch what was known as the Devices and Modeling group. With little initial funding or lab space, the new group ultimately grew to one of NREL's larger scientific groups.

Kazmerski described Coutts as a "technical visionary and model" who will remain a resource for the lab.

He recalled that he had an inkling of Coutts' independent approach during the recruiting when he was given three British telephone numbers. He failed to reach Coutts at home or his university office. "Imagine my surprise when I had to carry out this SERI hiring with Tim at his favorite pub in Newcastle! That was unusual, even for the lab at that time, " he said.

In that role, he recruited and mentored at least 55 young scientists to NREL. Most remain in the PV field.

"He champions the science," said NREL Principal Scientist Tim Gessert. They started full-time work at the lab on the same day, September 20, 1984. "He lets the work go where it will, and he's not too worried about where things are going," Gessert said. "His students have gotten some very interesting results in that process."

Coutts become very interested in characterizing and improving the performance of a critical layer in thin-film solar cells known as transparent conductive oxides, or TCOs. They are used in several large-area applications such as flat-panel displays, PV arrays and heat-reflecting windows.

TCOs are tricky because they must do two things well — allow light to pass through and act as a conductor of the electrical charge. Improving the balance between these two performance characteristics is challenging enough, but their thickness and rigidity also present manufacturing challenges.

Coutts was among the first to realize the importance of TCOs in PV performance.

"Some TCOs have been around for 50 years, but largely because of his work, we now know there's still an awful lot to be learned about them," Gessert said. "We've only scratched the surface of what this family of materials might be able to do."

Coutts received the American Vacuum Society John A. Thornton award in 1999 for his work in transparent conducting oxides, and in 2005 the William R. Cherry Award for photovoltaics research by the Institute of Electrical and Electronics Engineers. He was named an NREL research fellow in 1993, after receiving an NREL Staff Award for outstanding achievement in 1986.

He has chaired and co-chaired 10 PV conferences, including the very successful 33rd IEEE PV Specialists Conference in San Diego in May that drew a record 1,500 attendees.

By how much? Clearly, he doesn't want to get caught underestimating their potential again. He says a thin-film solar cell with 25 percent efficiency is within reach, while third-generation cells, with very novel designs, may approach 55 percent.

Learn more about the lab's research in PV.