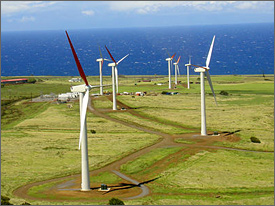 Wind turbines stand as clean energy sentinels on the north coast of the island of Hawaii at the 250-acre Hawi Renewable Development. A DOE/NREL initiative with the state of Hawaii aims to greatly expand the use of renewables and transform the islands into a clean energy society within 20 years.
Credit: Hawaiian Electric Light Company (HELCO) 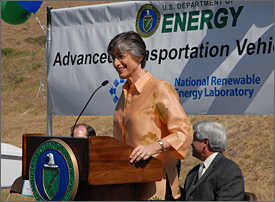 A look at efforts to be pursued under the Hawaii Clean Energy Initiative, a partnership between the state and the U.S. Department of Energy:

Source: Office of the Governor

The U.S. Department of Energy has established a global initiative with island nations to develop clean energy programs and meet aggressive renewable energy targets within a generation.

Accompanied by NREL director Dan Arvizu, they were attending the Business Roundtable Caribbean Renewable Energy Conference hosted by the U.S. Embassy in Nassau. This July 24th event assembled island stakeholders in discussions on how to expand sustainable energy, particularly biomass energy from agriculture. View Dan Arvizu's presentation from the conference.

On August 27, Iceland joined as the third nation member when Ossur Skarphedinsson, Minster of Industry, Energy, and Tourism signed the agreement.

"For New Zealand to reach our ambitious renewable energy targets we are clearly going to require new policies and technology to help the uptake of clean energy technology," Ambassador Ferguson said.

The EDIN is similar to the partnership that DOE established in January with the state of Hawaii. Under the Hawaii Clean Energy Initiative, the state aims to have 70% of its energy needs supplied by clean energy resources, including renewables and efficiency, by 2030—reducing crude oil consumption by up to 72%. Hawaii Gov. Linda Lingle attended the Nassau meeting, and then flew to Colorado to tour NREL with Assistant Secretary Karsner and Director Arvizu.

Hawaii currently relies on imported oil for 93% of its energy needs. Among the clean renewable sources Hawaii is considering are solar energy, wind power, and bioenergy from local agriculture, as well as the potential of geothermal and ocean wave energy.

"With utility rates as high as 49 cents a kilowatt-hour, Hawaii's islands need to move toward a comprehensive energy strategy that lowers and stabilizes their utility rates," said Mary Werner, NREL's executive manager of integrated deployment.

The initiative is expected to last several years.

Both a Security and Environmental Issue

"Hawaii imports virtually all of its energy now, so it is especially vulnerable," Gov. Lingle said, citing major tanker ports on the islands, in remarks during her NREL visit.

"As an island state with abundant renewable energy sources, Hawaii is proud to support this partnership and work with the Department of Energy and other participant nations to increase our energy independence and expand our renewable energy expertise," Lingle said.

Learn more about NREL work in technologies that could make a difference for Hawaii and other island communities.