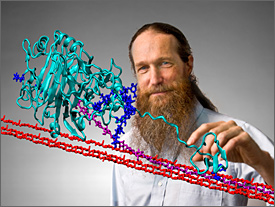 NREL senior scientist Michael Crowley and his animation of an enzyme molecule, which was awarded second place in the Department of Energy's Electronic Visualization competition.

In reality, Cel7A is just the opposite – it's a vegetarian molecule that is nature's primary agent for decaying plants. Crowley, an NREL senior scientist, and his associates are modeling Cel7A in hopes of bioengineering a version that will accelerate the process of making cellulosic ethanol from woody plants and farm wastes. A breakthrough like this would enable biofuels to be produced more easily from abundant biomass wastes and could reduce our nation's dependence on foreign oil.

Crowley's animation was awarded second place in DOE's Electronic Visualization competition sponsored by the Scientific Discovery through Advanced Computing program. He received the award at the program's annual meeting in Seattle.

What makes the award especially noteworthy is the nature of the competition. His animation was one of 52 submissions by national laboratories and universities. Nearly all of the contestants were visualizing the behavior of large-scale phenomenon – the top prize went to a visualization of Hurricane Katrina.

Crowley's work focuses on the behavior of a single, very important molecule. While something like a storm model can become very large, it can be divided into discrete sections and follows a logical sequence.

In contrast, Crowley said, animating Cel7A required finding ways to successfully model the interactivity of many atoms interacting dynamically with each other – simultaneously.

"It is very difficult to parallelize the process to run even on a huge computer," Crowley said. "We're dealing with one molecule, but a lot of atoms and they're all talking to each other. Even if you have 1,000 processors, it's not easy to speed up."

Crowley is a Long Island native. He studied chemistry as an undergraduate at Fordham University and received a Ph.D. from the University of Montana. He most recently worked at The Scripps Research Institute in La Jolla, Calif., where he studied protein folding in human metabolism and helped develop high performance computer programming. He joined NREL 16 months ago and started his own high performance computer group after consulting with the laboratory's biofuels program. Read more about Michael Crowley and access his publications.

It's All About Metabolism

Now Crowley is investigating an enzyme found in fungi and termite guts that breaks down the tough complex carbohydrates in plant cell walls and turns them into a simpler form of sugar. To him, it's still all about metabolism.

In nature, that sugar is food for the termite or other organisms. At NREL, it becomes the material that is more easily refined into biofuels.

By using cellulose, refiners could make large quantities of ethanol from the widely available leftovers from agriculture and forestry rather than using edible corn and other grains.

While Cel7A does its catalytic job well in nature – it produces one unit of simple sugar per second – it would have to work much faster to convert enough cellulose to expand liquid biofuels into an affordable choice at the pump.

Changing it won't be easy. The same biochemical and structural factors that make plants resilient in nature make them difficult to break down for fuels.

Visualizing the enzyme's process on the submolecular scale could help NREL scientists to see opportunities where they might re-engineer the enzyme – perhaps by combining it with elements of different enzymes that work faster.

The goal: double the molecule's output of simple sugars to a pair of units per second.

"Visually, our brains can recognize patterns very quickly," Crowley said. "We can look at an animation and see what is different or what is wrong very quickly. We can sample that region of the enzyme, analyze it, and get the real science out of it."