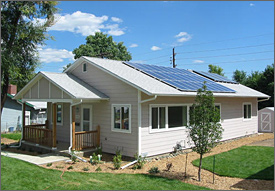 The NREL/Habitat for Humanity Net-Zero Energy Demonstration Home in Wheat Ridge, CO, has exceeded performance expectations, generating a surplus of power in its first two full years of occupation. 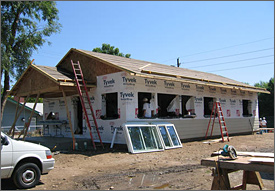 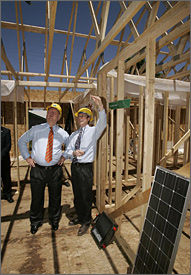 Secretary of Energy Samuel Bodman toured the construction of the home in 2005 with NREL researcher Paul Torcellini.

From the curb, the new home in Wheat Ridge, CO, looks like another tidy ranch on a shady street. Neighbors don't suspect they are living next to a power plant.

In 2005, NREL and Habitat for Humanity of Metro Denver collaborated to build an affordable and sustainable Net-Zero Energy model home that would generate as much energy as it consumes. Three years later, the project is exceeding expectations.

Not just a net-zero energy building, the house produced 24 percent more energy on a source energy basis than it consumed in the first year of monitoring. In its second year, it produced a 12 percent energy surplus. The extra electricity flows straight to the grid. When the energy-efficient construction features of the home are combined with solar water heating and solar electricity, the home saves about 60% of the total energy that would be used in an identical home built to meet local codes.

NREL and Habitat collaborated on the 1,280 sq. ft., three-bedroom house to demonstrate how net-zero technologies work in a challenging climate — in this case, searing triple-digit summers and below-zero winters.

During the blizzard winter of 2005-2006, the rooftop solar system was regularly snow-covered, and yet the house still registered a large annual power surplus.

The home was planned as an affordable home for single-parent families — in this case, a mother with two school-aged boys.

Senior Engineer Paul Norton of NREL's Electricity, Resources, and Building Systems Integration Center said researchers have become adept at modeling every aspect of a house in order to shave energy consumption — except for one important factor: the occupants.

Heating and cooling devour more than 50 percent of a household energy budget, and appliances and lighting consume another 28 percent. Designers can plug the most efficient systems, appliances and light bulbs into their models. But they cannot control the occupants, who fiddle with the thermostat, or add big-screen TVs or leave their electronics humming 24-7.

"The energy target is met or missed by the designers and occupants together," Norton said. "We're very good at getting a house to net-zero. But are they thinking about energy when they buy a TV? We can't design for that."

Fortunately, the Carr Street homeowner is very energy-conscious, Norton said. She and her sons use less hot water than an average family and they tolerate higher indoor temperatures rather than installing an active cooling system.

Energy Efficient and Simple by Design

Nationwide, Habitat and DOE experimented with five energy-efficient home designs in Pennsylvania, Florida, and Tennessee, as well as Colorado. The Colorado home has not yet been entirely duplicated elsewhere, but elements of all of the energy-efficient prototypes have been incorporated into more than 600 Habitat homes in 16 states.

Working with the Department of Energy's Building America program, designers selected equipment and appliances that used less energy, while also generating less heat. And they made meaningful changes to elements of the house that are overlooked or hidden in the walls.

"We made a very strong commitment to keeping it simple," Norton said. "There are no prototypes in the home. You can call people in the phone book to fix anything in the house."

The efficiency results are included in three technical papers now in publication.

If he were to design it again, Norton says he would add an active cooling system that might decrease the home's total energy surplus, but would increase its comfort level. Habitat's policies don't include the use of air conditioning in their designs.

"I don't think it stays cool enough in the hot summer for an average occupant," he said. "I would consider an attic fan to enhance the passive cooling."

Midwest Research Institute (MRI) and Battelle sponsored the Habitat home on behalf of NREL. MRI and Battelle manage NREL for the U.S. Department of Energy.