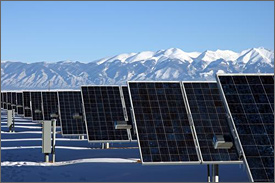 The Alamosa Photovoltaic Plant generates about 8.2 megawatts of power. NREL rates the San Luis Valley, where the plant is located, as having the best available resource for solar power conditions in Colorado. Renewable energy resources are not always located within proximity to the grid — one of the issues the lab is analyzing for the Department of Energy and the Western Governors' Association.
Credit: Steve Wilcox 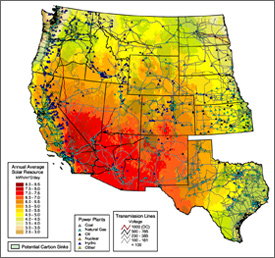 This map shows that some of the most promising sites for concentrating solar power in the southwestern U.S. are in some of the most remote areas of the region. The U.S. Department of Energy and the Western Governors' Association are tackling how to get electricity from where the renewable energy resources are best to towns and cities. View high resolution map (JPG 1.1 MB)

NREL and the U.S. Department of Energy (DOE) are helping western states address a critical topic: how to best connect consumers with the region's abundant renewable energy resources.

Many of the nation's most promising locations to generate power from solar, wind and other renewable resources are in the West. So are eight of the nation's top-10 fastest growing cities and seven of the fastest-growing states.

It seems like a perfect match — until you look at a map. The region is crisscrossed by a massive electrical grid known as the Western Interconnection. However, few of its lines extend to remote and difficult terrain where some of the best renewable resources exist. Even where lines do exist, spare capacity often is scarce.

And, many new transmission projects are being pursued independently of one another.

The Western Governors' Association (WGA) supports the development of 30,000 megawatts of clean energy in the region by 2015, and a 20 percent increase in energy efficiency by 2020.

But a regional analysis has not been undertaken — until now.

The DOE and WGA will spend $2.3 million over three years to address western regional power supply issues and increase coordination of renewable energy generation and transmission in 11 western states, two Canadian provinces, and areas in Mexico that are part of the grid.

"This study looks at whether you can eliminate some inefficiencies by looking at the region as a whole," said David Hurlbut, NREL senior analyst. "It's an effort to remove the state stovepipes and look at regional alternatives to see if the overall benefits to customers are better, and if the costs are lower."

NREL Director Dan Arvizu spoke to the WGA on May 28. Several lab teams are contributing to the study, including the Strategic Energy Analysis and Applications Center, the Wind Systems Integration team and the Concentrating Solar Power Program.

"At the end of this project, we should have improved data and other information to help our region make decisions on where to build transmission lines," said Wyoming Gov. Dave Freudenthal, chair of the WGA.

NREL also is working with the U.S. Bureau of Land Management (BLM) to develop an environmental and community impact model for renewable energy projects on the bureau's lands.

For solar alone, BLM is considering 125 applications in six western states. They would involve almost a million acres of land and have the potential to generate 70,000 megawatts of electricity, enough to power 20 million average U.S. homes.