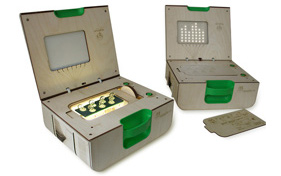 This portable laboratory tests algae for its ability to produce hydrogen and could one day be distributed to high schools across the country.

The Lunchbox Laboratory is a portable box outfitted with all the research tools that high school students need to screen algae strains for their ability to produce hydrogen.

It was carefully conceived and built by Jonathan Meuser, a former NREL summer intern with the Chemical and Biosciences Center, and Futurefarmers, a San Francisco-based art collective.

"We thought it would be inspiring," Meuser said. "The students would be able to make a contribution to science through their course work."

As a fuel, hydrogen is a promising, long-term renewable option where the only byproduct is water vapor. Through a photobiological process, the enzymes in certain microalgae use photosynthesis to split water, and under some conditions naturally make hydrogen. However, the process is slow and scientists are searching for other naturally occurring microbes that produce hydrogen at higher rates.

Students Can Do Real Science

With thousands of algae species in the world, most untested for their hydrogen-producing abilities, the students' work with the Lunchbox Lab could serve as a preliminary screening to rule out nonproductive strains. This could help ensure that only productive strains reach laboratories.

"They could be doing real science and helping solve energy issues," Meuser said.

The lunchbox would turn thousands of students loose to help solve the nation's energy challenges while promoting networking and collaboration with other students nationwide. The lab's educational potential has already prompted teachers to call NREL about obtaining the box.

How the Lunchbox Works

The Lunchbox Laboratory contains algae samples, custom-designed glass beakers, an LED light source, an embedded pressure sensor to control the light, and a bioreactor. The glass beakers sit in holes so that the bottom half of the beakers remain in darkness, leaving the top visible to allow for algae sample injections.

Once the algae samples are in place, air-tight stoppers seal the beakers. The stoppers, equipped with chemochromic hydrogen sensors developed at NREL, turn blue when hydrogen is produced after the algae are exposed to light.

By using the embedded pressure sensor, the box allows the algae to be exposed to varying amounts of light and different periods of darkness, permitting comparisons between varieties of experimental conditions.

Meuser began the project as an intern when Futurefarmers contacted NREL about building a do-it-yourself algae-hydrogen reactor. The artists wanted something that looked intriguing and engaging for entry into the Design and the Elastic Mind Exhibit at the Museum of Modern Art.

Design and the Elastic Mind is a museum exhibition that focuses on the ability of designers to grasp advances in technology, science and human behavior and convert those technical advances into objects and systems that people can understand and use.

Meuser, now a Ph.D. student in the Environmental Science and Engineering Department at the Colorado School of Mines, pushed the sensory development, enabling Lunchbox Laboratory to detect hydrogen. Amy Franceschini and Michael Swain of Futurefarmers did the majority of the visual design and construction on the prototype.

For more information and to view the exhibit online, visit the Museum of Modern Art Web site. 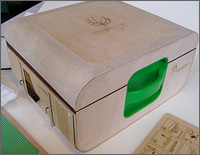 The Lunchbox Lab shown in its storage position.
Credit: Futurefarmers 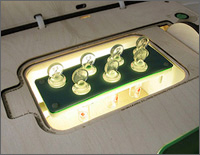 A close-up of the Lunchbox Lab’s seven beakers and stoppers, which turn blue when hydrogen is detected.
Credit: Futurefarmers 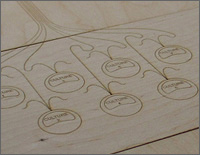 The wooden covering acts as a diagram for beaker placement during testing.
Credit: Futurefarmers

A close-up of the embedded pressure sensor that allows the algae to be exposed to varying amounts of light and different periods of darkness.
Credit: Futurefarmers

Photo of the box with the lid open before being set up for testing. The green embedded pressure sensor dials are shown next to the carved diagram of the beakers.
Credit: Futurefarmers 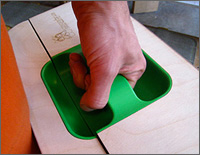 This photo shows the ease that the lab can be transported—just like a lunchbox.
Credit: Futurefarmers