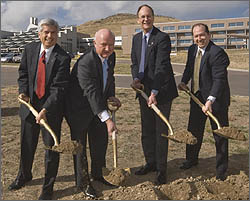 NREL is in the process of designing and building key facilities to meet the nation's crucial research objectives for clean and sustainable energy technologies. A $101 million increase to NREL's budget makes it possible for NREL to move forward with the construction of new facilities. The budget increase, part of the 2007 appropriation approved earlier by Congress, supports President Bush's initiatives in solar, biofuels, and other renewable energy technology development. The construction also emphasizes NREL's role in advancing the U.S. Department of Energy's (DOE) Transformational Energy Action Management Initiative, an effort to maximize energy efficiency and renewable energy generation.

Among the new facilities, and first on the construction list, is the new Research Support Facility. This office complex promises to be one of the greenest buildings ever developed. It will be built in accordance with the U.S. Green Buildings Council's standards and is expected to achieve the council's Leadership in Energy and Environmental Design Platinum rating—its highest designation. Through the use of energy efficient features like advanced daylighting, super insulation, low-emissivity windows, and other innovative technologies, the facility will have lower operating costs and little to no carbon footprint.

The Research Support Facility will be built based on a unique design-build contract. This contract indicates that a single contractor performs the architectural, engineering, and construction tasks, improving efficiency, shortening the construction schedule and increasing value.

Upon its anticipated occupancy in early 2010, the approximately 200,000 square foot facility will house up to 800 employees, many of which are now located in leased office space.

Another facility scheduled for construction is the Integrated Biorefinery Research Facility (IBRF). The facility will expand NREL's biomass-to-ethanol research capabilities by allowing the laboratory to work simultaneously on multiple projects with multiple partners. The IBRF will be an expansion of the current Alternative Fuels User Facility.

NREL's long-term campus expansion also includes plans for additional facilities for super computing as well as biological and chemical research, and systems testing and validation. In addition, NREL is planning for future infrastructure expansion, including roads, walkways, and utilities.

On the DOE Office of Energy Efficiency and Renewable Energy Web site, you can view the proposed layout of the campus.

NREL plans to operate its facilities using more green power in the near future. To develop its own power, the lab is constructing a Renewable Fuels Heating Plant (RFHP) and a Mesa Top Photovoltaics (PV) Array.

The Renewable Fuels Heating Plant, using biomass such as wood chips from forest thinnings along Colorado's Front Range, is expected to reduce NREL's use of natural gas by up to 75%. To heat lab facilities, the plant will operate in conjunction with an existing natural gas-fueled boiler system. DOE, on behalf of NREL, has set up an Energy Savings Performance Contract (ESPC) with a third party provider, Ameresco Energy Services Co. Under the ESPC, Ameresco will pay for construction of the project, and then NREL will repay the company with its energy cost savings. View an illustration of the RFHP that includes a schematic of the biomass to energy process.

The Mesa Top PV Array will produce an estimated 750 kilowatts of solar energy to power NREL facilities. Expected to be completed in May 2008, the installation could provide as much as 7% of the electricity NREL uses. The PV project is made possible through a Solar Power and Services Agreement between SunEdison and the Western Area Power Administration. SunEdison will finance, build, own, and maintain the system. The agreement provides solar energy services to DOE for use at NREL. See a rendering of the PV array that includes a photo of the planned mesa top location.

"These forward-thinking, innovative agreements show just how much can be accomplished when we leverage the most appropriate roles for the public and private sectors, and we challenge ourselves to think in new ways about how we accomplish our goals," said DOE Assistant Secretary Alexander Karsner. "This is a big win for clean energy, for our environment, for our nation's energy security, and for taxpayers."

To prepare for proposed construction, NREL is in the process of conducting an environmental assessment to review potential impacts to natural resources and the surrounding community of proposed construction activity. Specifically, the assessment will address public policy, air quality, noise, soils, and sustainability issues and concerns. An associated traffic study is also being conducted to identify mitigation strategies to offset the effects of increasing the numbers of staff on the site. Once the environmental assessment is complete, a draft will be released to the public for additional comment in early 2008.

Read more about the environmental assessment.