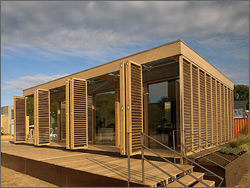 The National Mall in Washington, D.C., buzzing with hundreds of thousands of people who visited the Solar Village during the Solar Decathlon 2007 two weeks ago, has now settled and quieted.

The Solar Decathlon 2007 proved successful in educating the public about the commercialization of solar-powered, sustainable homes as well as providing a hands-on learning experience for the student architects and engineers who have a future in building-integrated solar technologies.

The Solar Decathlon held its Awards Ceremony October 19th, when the team from Technische Universität Darmstadt of Germany took home the overall first-place honors finishing with 1,025 points out of 1,200 points possible. Darmstadt blew the jurors away with an impressive showing of lighting, architecture, and engineering design and innovation. The University of Maryland followed close behind as the second-place winner, and Santa Clara University received third-place honors. Massive lines trailed from the doors of these impressive solar homes as visitors showed their willingness to wait as long as an hour or more to take tours.

Two days after awards and honors were announced, the collegiate teams scrambled to disassemble and pack up their homes to ship back to their states or countries.

Also during the Decathlon, DOE expanded the concept of the Decathlon by signing a Memorandum of Understanding (MOU) between DOE, represented by Assistant Secretary for Energy Efficiency and Renewable Energy Alexander Karsner, and Spain, represented by Under Secretary of Housing Fernando Margo Fernández, to implement a Solar Decathlon Europe. With the signing of this MOU, the United States and Spain will exchange information about the rules, judging, scoring, safety, and site and team selection. The first Solar Decathlon Europe is scheduled to begin in 2010 in Spain and will alternate years with the U.S. Solar decathlon. The U.S. Solar Decathlon will continue to run every two years.