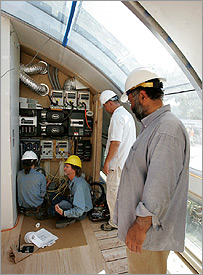 While the students assembled their houses for the 2005 Solar Decathlon, a team from NREL installed monitoring systems to capture data essential to conducting several of the contests. The University of Michigan house is pictured.
Credit: Stefano Paltera/Solar Decathlon

The time has come for college and university students from around the world to gather once again at the National Mall in Washington, D.C., to show off their innovative, creative, and environmentally friendly solar homes at the Solar Decathlon.  This is the third Solar Decathlon, with the first and second such events held in 2002 and 2005.

"NREL's heavy involvement in the Solar Decathlon adds prestige to the competition and legitimizes its merit as a showcase and research platform for advanced solar and building technologies," said Mike Wassmer, who is an NREL employee and the Rules and Regulations Committee chair and Lead Engineer for the Decathlon. Wassmer was a member of the 2002 Solar Decathlon team from the University of Colorado at Boulder.

"I am responsible for ensuring that we conduct a fair and compelling competition that stimulates the creativity and intellectual curiosity of participating students and motivates these young architects and engineers to seek solutions to problems that DOE has identified as priorities," said Wassmer.

The 2007 Solar Decathlon challenges 20 student teams from the United States including Puerto Rico; Canada; Germany; and Spain to incorporate building-integrated photovoltaics to meet the everyday needs of a homeowner using only solar energy.  To achieve these goals, the students take two years and a $100,000 budget (funded by DOE) to design and build their homes while putting their knowledge of engineering, architecture, business, finance, marketing, computer science, and graphic arts into practice. The DOE funding is only part of the story.  These projects are expensive (e.g., several hundred thousand dollars). Funding is necessary to not only design, build, and transport these state-of-the art prototype homes to the Mall, but it is also necessary to support the educational experience of the student team members, including getting them all to Washington D.C., and housing and feeding them all while they’re there. Often times the teams also have to make significant investments in the infrastructure and tools necessary to build a house. So along the way, these students not only become master builders, they must also master the art of fundraising to mount a successful entry. 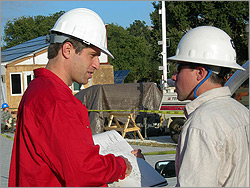 Mike Wassmer (left) discusses the competition with Jeff Lyng, a member of the 2005 University of Colorado team. Wassmer, an NREL employee, is the chair of the 2007 Solar Decathlon Rules and Regulations Committee, distinguished by his red shirt, as well as the Lead Engineer.
Credit: Wendy Butler-Burt, Department of Energy

According to NREL's Solar Decathlon Project Manager, Cécile Warner, the students are allowed to "pick the brains" of  NREL's experts within the solar energy research and development fields—but the students must put the advice into practice by themselves.

"NREL is a natural lead in both conceiving and managing the event because we cover all renewables here at the lab," Warner added. "We're a one-stop shop for the Decathlon."

Each team will compete in ten contests to prove their homes are both energy efficient and comfortable to live in.  The categories and point values of the ten contests are: 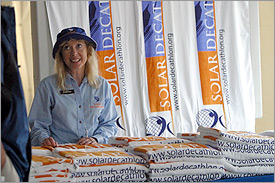 Cécile Warner of NREL was the project manager of the 2002 and 2005 Solar Decathlons and is repeating that role for the 2007 competition. Warner has often said that the safety of the competitors, organizers, and public is her top priority. She is pictured during a lighter moment in 2005 distributing towels that the competitors used to compete in the laundry activity of the Appliances contest.
Credit: Stefano Paltera/Solar Decathlon

Within these contests, each team must prove its home's ability to sustain comfortable temperatures, light the space sufficiently and attractively, power household appliances, provide hot water, and provide enough electricity to power an electric car—all while maintaining an appealing and livable atmosphere.

The houses are open to the public starting October 12.  The schedule of events includes house tours, consumer workshops, "Ask the Experts" panels, Building Industry Day, and educational exhibits.  The overall winner is announced Friday, October 19.  For both the 2002 and 2005 Decathlons, the University of Colorado at Boulder took home the first-place trophy.

While the Solar Decathlon is educational fun with a competitive edge, it also sheds light on a bigger issue that people around the world are trying to solve: affordable, renewable energy that can help improve our environment while addressing future energy needs.

"We are catching these professionals at an early part of their careers.  [The Solar Decathlon] helps to excite them about our technologies so they can achieve careers in this field in the future," Warner said.