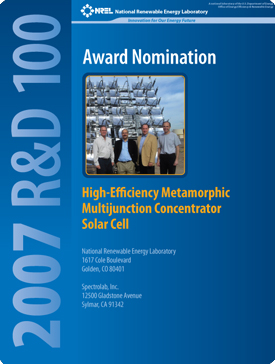 R&D Magazine recognizes the world's top 100 scientific advances with its annual R&D 100 Award for innovations with the most significant commercial potential. This year, NREL and Boeing Spectrolab were jointly awarded an R&D 100 Award for developing the first solar cell to break the 40% efficiency barrier, the solar equivalent of breaking the four-minute mile. Boeing Spectrolab worked under subcontract as part of NREL's High-Performance Photovoltaic Program, which is funded by the U.S. Department of Energy.

The High-Efficiency Metamorphic Multijunction Concentrator Solar Cell, or HEMM solar cell, achieved the highest efficiency level of any photovoltaic device ever when it broke the 40% conversion efficiency barrier, making it twice as efficient as a typical silicon solar cell. The HEMM solar cell is designed for solar power systems that use lenses and mirrors to concentrate sunlight onto small, high-efficiency solar cells, requiring far less semiconductor material than standard flat-plate solar panels. Boeing Spectrolab is planning to commercialize this technology for utility-scale solar power plants, such as those being planned in the southwestern United States.

"Once again, DOE's labs are at the cutting edge of innovation with new technology developments to enhance America's economic and national security," said U.S. Secretary of Energy Samuel Bodman. "My heartiest congratulations to the DOE researchers and scientists that have won R&D Magazine's prestigious awards this year."

Like the high-efficiency solar cells used for space, the HEMM solar cell uses three layers of semiconductor material—gallium indium phosphide, gallium indium arsenide, and germanium—each of which is tuned to capture a slice of the solar spectrum. When combined, these materials convert 40.7% of the sun's rays into electricity under a concentration of 240 suns. This means that when the cell is exposed to sunlight that is concentrated to 240 times the normal intensity of the sun, 40.7% of the sun's energy is converted directly into electricity. 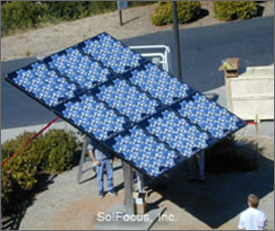 Sol Focus, Inc., in California, which made this 2.25-kW concentrating solar system, plans to use high-efficiency solar cells from Spectrolab for residential and remote community applications.

But far more than that, the HEMM approach represents a powerful new technology for designing very high efficiency multijunction (multiple-layer) solar cells, enabling the present triple-junction or "3-layer" device to reach as much as 45% efficiency. By using metamorphic or "lattice-mismatched" materials for device design, researchers can expand their selection of semiconductor materials, potentially leading to 4-, 5-, or 6-layer solar cells that can convert more than 50% of the solar spectrum to electricity.

This joint effort brings to 40 the number of R&D 100 Awards earned by the laboratory. NREL researchers who worked with this project are Senior Research Supervisor Martha Symko-Davies, and Larry Kazmerski, director of the National Center for Photovoltaics.

"This R&D 100 award is another important milestone in NREL's 30 year history of developing clean energy technologies, many of which are now available to the consumers," NREL Director Dan Arvizu said. "Breaking the 40% barrier is a significant step in reducing the cost of solar energy, a goal set by the President in his Solar America Initiative."