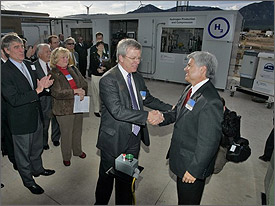 Xcel Energy CEO Richard Kelly dedicates the system while NREL Director Dan Arvizu (right) and members of the media, government officials and others look on.

Xcel Energy and the National Renewable Energy Laboratory recently unveiled the Wind2H2 project, a unique facility that uses electricity from wind turbines to produce and store pure hydrogen, offering what may become an important new template for future energy production.

"Today we begin using our cleanest source of electricity — wind power — to create the perfect fuel: hydrogen," said Richard Kelly, Xcel Energy chairman, president and CEO. "Converting wind energy to hydrogen means that it doesn't matter when the wind blows since its energy can be stored on site in the form of hydrogen."

The facility links two wind turbines to electrolyzers, which pass the wind-generated electricity through water to split the liquid into hydrogen and oxygen. The hydrogen can be stored and used later to generate electricity from either an internal combustion engine turning a generator or from a fuel cell. In either case, there are no harmful emissions and the only by-product from using the hydrogen fuel is water.

Located at NREL's National Wind Technology Center near Boulder, Colo., a new building houses the electrolyzers and a device to compress the hydrogen for storage; four large, high-tech tanks to store the hydrogen; a generator run by an engine that burns hydrogen; and a control room building, where computers monitor all the steps of the process.

"Advancing knowledge and sharing innovation are among NREL's primary goals," NREL Director Dan Arvizu said. "Our growing strategic partnership with Xcel Energy helps us reduce the time and effort between research discoveries and sharing the benefits of what we learn with energy consumers." 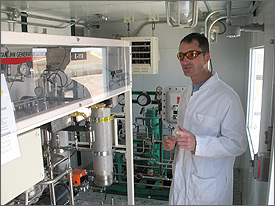 Currently, there are limitations to both wind power and hydrogen. Wind farms only generate electricity when the wind is blowing, which is about one-third of the time in the United States. This creates the need for backup generation, which is usually fossil-fueled.  Hydrogen, while the most common element in the universe, isn't found in its pure form on Earth and must be either electrolyzed from water or stripped out of natural gas, which are energy-intensive processes that result in greenhouse gas emissions.

"By marrying wind turbines to hydrogen production, we create a synergy that systematically reduces the drawbacks of each," Kelly said. "Intermittent wind power is converted to a stored fuel that can be used anytime, while at the same time offering a totally climate-friendly way to retrieve hydrogen, to power our homes and possibly cars in the future."

For more information about the wind-to-hydrogen project, view the video and animation.

The new facility is designed to help researchers: