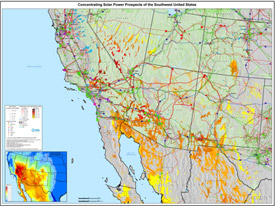 Solar Resource Screening in the Southwest

NREL's geographic information systems (GIS) team produces maps of renewable energy resources that demonstrate which technologies, whether solar, wind, hydrogen or biomass, are the best, most workable energy solutions. But that's not all.

GIS is a hardware and software system typically associated with map-making. However, GIS also involves analyzing, storing and retrieving geographic data on a local, regional and global scale. More specifically, GIS data sets contain spatial and non-spatial data that are manipulated using geoprocessing tools. From these derived data, maps are created to display the spatial relationships between, for example, renewable resource locations, transmission corridors, and energy demand centers. GIS can help to determine not only the location of resources, but also the cost of development and potential limitations of particular areas.

"It's not just the ability to create a map, although that's important, too," says Heimiller. "People are starting to understand that when you look at the output, we're showing information that was produced by the GIS system using different data pieces to arrive at the final answer." NREL researchers realize that when they can visualize the spatial data, it's easier to quantify and analyze.

For example, as part of alternative transportation analysis, researchers in the NREL Hydrogen and Fuel Cells Program called on NREL's GIS analysts to illustrate hydrogen demand nationwide and in selected urban areas. "We were trying to predict the hydrogen demand at different penetration rates," explains GIS analyst Anelia Milbrandt. They targeted specific age groups, income and education levels. "We also looked at the number of vehicles per household, commute distances, hybrid vehicle registrations, and if there were state incentives, clean cities coalitions or nonattainment areas (where pollution levels exceed national standards for air quality)," says Milbrandt.

After the team gathered demographic, socioeconomic, transportation, and policy information—attributes that influence hydrogen demand—NREL's GIS analysts entered the information into a GIS database system. From this system, a visual map was created. The team then analyzed the data on a national level at a resolution of 20 by 20 miles. This allowed them to better understand the patterns of hydrogen demand. Transportation analysts further used this information to estimate infrastructure needs and hydrogen usage throughout the country, and to predict transition infrastructure costs.

Using these data, the team was able to illustrate local demand for hydrogen in selected urban areas, such as Los Angeles, Houston, Atlanta, Chicago, New York, Minneapolis/St. Paul, Washington and Detroit. They were able to identify "hot spots" where hydrogen demand is expected to be very high. "The downtown areas aren't as popular as we expected, although a lot of folks work there. As a study by the University of California, Davis* indicates, most people fuel near their homes rather than close to work," Milbrandt says.

In addition, the team took a closer look at the cities of Los Angeles and New York by analyzing census-tract level data to find the best locations for fueling stations. "For those cities, we wanted to know where stations could be located and what the infrastructure would look like," explains Milbrandt. "We're looking at places where the economy is strong and there are local initiatives to support hydrogen infrastructure."

What's next for the project? "The urban areas don't exist by themselves. They're connected to a large extent with the surrounding area," says Milbrandt. "There's a lot of traffic between certain urban areas, for example, Los Angeles to Las Vegas." The team will study regional interactions and the spacing of stations and will also continue to analyze hydrogen demand and infrastructure possibilities for fleets.

NREL's GIS team also worked on a concentrating solar power project that analyzed solar resource information and included limiting factors, such as slope data, to eliminate inappropriate resource areas. The results of this project will be used to help the Department of Energy and other organizations plan solar projects, understand development potential, and as a basis for further analysis. "For one project, we used GIS to create an initial supply curve based on the proximity of the screened solar resource to the transmission system and cities," Heimiller says. "Our next step could incorporate more realistic costs based on transmission line availability and urban characteristics. We used basic assumptions here, but they could be varied according to permitting, population density or ownership."

"GIS is an amazingly flexible tool," Heimiller adds. "You can use it for anything involving analysis of spatial relationships, visualization of patterns and landscape processes. The applications that I've seen for GIS range from finding the best route for emergency crews to pollution studies to atmospheric models. There's a lot of potential for it here at the Lab." 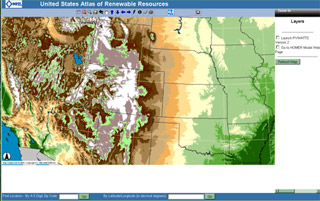 Want to try NREL's GIS technology for yourself?

NREL's Geospatial Toolkit allows users to see renewable resource data at a glance. According to Heimiller, 'The GIS toolkit is a stand-alone, simplified GIS application that lets people see the data and interact with it. Inside the toolkit they can do simple spatial analysis, queries, and so on.' The toolkit is intended to support the decision making process, but has limited capability for creating maps or doing more sophisticated analysis. Also, the current data available are for nine countries (Bangladesh, Brazil, El Salvador, Ghana, Guatemala, China – Hebei province, Mexico – Oaxaca, Nicaragua, and Sri Lanka).

The GIS team has also developed interactive mapping applications that allow users to view renewable energy information via the Internet. The GIS Internet mapserver, or IMS provides users with a visual tool for interacting with complex forms of information. For example, users can zoom in on a geographic area of interest and pull up layers with different renewable resource information, as well as reference data such as roads and rivers to help pinpoint their location. Several sites on the IMS also have a tool that can run the PVWatts calculator for estimating the cost of electricity generated by a photovoltaic system. The U.S. Atlas of Renewable Resources visualizes the distribution of resource and other pertinent data. If users are interested in downloading renewable resource data, they can visit our FTP site.