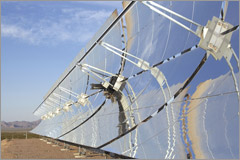 Researchers at the National Renewable Energy Laboratory (NREL) have contributed to the rebirth of a solar energy technology in the Southwest. The first concentrating solar power (CSP) plant built in the United States in 16 years began operation in Arizona in December 2005. Arizona's first-ever CSP plant produces enough power for 200 homes. A CSP plant now being assembled in Nevada will be on a much grander scale, producing enough power for 11,000 homes. The solar power plant in Boulder City, Nevada, which spans 300 acres, will be the largest installation of its kind since 1990. With advanced field-testing and detailed assessments, NREL's researchers are supporting the development of new large-scale solar developments like these.

Parabolic-trough systems, a CSP technology, are being used at both of these plants. Parabolic-trough concentrators use extended curved (parabolic-shaped) mirrored surfaces to concentrate the sun's heat on a thermally efficient receiver (basically a pipe) running the length of the trough. A heat transfer fluid, typically synthetic oil, is circulated through the receivers to achieve temperatures approaching 400°C. This fluid then passes through a series of heat exchangers to produce superheated steam. The steam expands through a conventional turbine/generator and produces electricity. To capture maximum sun exposure, concentrators track the sun throughout the day. Learn more.

NREL's researchers support the development and testing of concentrators for CSP systems, working with industry to prepare new collectors for the marketplace. For these new projects, NREL collaborated with Solargenix Energy, a U.S.-based solar technology company. NREL worked closely with Solargenix to assess the optical performance of several generations of Solargenix's parabolic-trough concentrators. Assessing optical performance includes testing how accurately the mirror shape follows the parabola and the accuracy of aligning the mirrors so reflected sunlight hits the receiver tube. NREL completed these assessments with its Video Scanning Hartmann Optical Test, or "VSHOT." By using NREL's VSHOT, Solargenix was able to fine-tune its concentrator, ultimately leading to a design that met its optical requirements, while requiring little or no adjustment when the concentrators were installed in the field. Minimal adjustments to align the concentrators in the field save money on project construction costs and also allow the concentrators to work more effectively. Get more information about VSHOT. 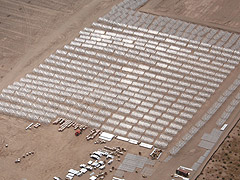 Assembly of the parabolic-trough system components is underway for the 64-Megawatt Nevada plant, which will generate enough electricity to power about 11,000 homes.
Credit: Solargenix

The Solargenix SGX-1 collector design developed for this system improved all facets of the earlier technology. The collector uses an innovative new aluminum hubbing system developed in partnership with Gossamer Space Frames to create a structure that is 30% lighter, has 50% fewer pieces, and requires substantially fewer fasteners than earlier designs. The aluminum structure provides better corrosion resistance and has been designed so that the mirrors are mounted directly to the structure and do not require any alignment in the field. The collector uses a new Schott receiver featuring a number of improvements that increase receiver lifetime and performance. The end result is a collector that increases performance about 15%, decreases investment costs about 15%, and improves component reliability for a net improvement of about 35% in total cost effectiveness. This system is the next generation of concentrating solar power technology. With an "R&D 100" nomination submitted to R&D magazine, this design has received considerable attention lately, leading to today's new solar power plants.

The concept for the Arizona plant, which is owned and operated by Arizona Public Service (APS), evolved out of collaboration between NREL and APS. The plant integrates parabolic-trough solar technology with an organic Rankine power cycle to create a small modular CSP plant that runs unattended. NREL conducted much of the preliminary analysis to evaluate the feasibility of such a design. NREL is also supporting APS to evaluate the possible future addition of a thermocline thermal-energy storage system that would allow the APS plant to dispatch solar power to meet the APS peak system loads, even when they occur after dark.

The collaboration between NREL and Solargenix is just one of the partnerships formed under the USA Trough Initiative. NREL initiated and manages this initiative for the U.S. Department of Energy. The USA Trough Initiative strives to reduce cost, improve performance, reliability, and U.S. competitiveness of parabolic-trough technology. In addition to this initiative, NREL's CSP research occurs in collaboration with private industry and universities with the aim to develop less costly and more efficient parabolic-trough solar field technology. NREL researchers work on improving the structure of parabolic-trough concentrators, receivers, and mirrors, and increasing the manufacturing of these components.

There's plenty of potential for more parabolic trough systems in the western United States. They currently represent the most cost-effective CSP technology for large-scale solar-electric power systems deployed today and integrate well with the existing utility infrastructure. NREL has developed solar resource maps for CSP that demonstrate this technology's huge potential, while a recent NREL report, The Economic, Energy, and Environmental Benefits of Concentrating Solar Power in California, illustrates that investing in CSP power plants delivers greater return to the state of California in both economic activity and employment than corresponding investment in natural gas equipment. A recent report for the Western Governor's Association suggests that, with appropriate policies in place, up to 4 gigawatts of CSP could be deployed in the near term in the Southwest with far greater potential in the long term.

Through NREL's advanced development and testing techniques, the next generation of parabolic-trough concentrators is quickly evolving. By collaborating with NREL and using its world-class research and development expertise, this collaborative project has achieved measurable successes. In addition to the first solar power plant in Arizona, the 64-MW historic installation in Nevada, and the advanced collector design, Solargenix became the first U.S. supplier to manufacture utility-scale solar technology in a market previously dominated by foreign suppliers.