From Alaska to Nebraska and all points east, west, and south—solar energy is all around us. Our national "solar resource" is enormous, even with all its regional variations. The energy in this resource could supply us with substantial amounts of clean, renewable electricity year after year. We just need to be able to extract and harness the sun's energy at a reasonable cost.

For more than two decades, NREL scientists have been working on ways to do that. Their brand of science is called "PV," for photovoltaics. At the heart of it are semiconductor devices, or cells, which convert sunlight directly into electricity. PV cells are assembled into flat panels or "modules," which in turn are configured into arrays of virtually any size.

PV technology has advanced greatly, but it still doesn't convert as much of the energy in sunlight as we'd like. Their electrical efficiency is one often-cited reason that PV still does not yet produce power as cheaply as more established sources such as natural gas and coal. Except in remote areas where utility service isn't available or in areas where incentive to using PV are provided, the price of PV power—about 20 cents per kilowatt-hour—generally can't compete.

Internationally, the United States is recognized as having the lead in developing thin-film photovoltaics, said Ken Zweibel of NREL. Europe and Japan have relatively little technical presence in CdTe and CIGS development, but they are a bit more involved in amorphous silicon (a-Si) technology.

One reason for the U.S. lead, Zweibel said, is the lab's research. DOE and NREL have funded thin films because "they have the vision to see that thin films provide the greatest potential to reach truly cost-effective PV electricity." The National Center for Photovoltaics, headquartered at NREL, has established partnerships with industry and universities across the country to work together to reach this goal.

Teamwork is an essential aspect of the work of DOE and its partners, said Bolko von Roedern, a senior scientist at NREL. For example, when a manufacturer is having trouble encapsulating CdTe, a research scientist such as NREL's Tom McMahon might be available to diagnose the problem and offer solutions. This ready give-and-take of information produces solutions to problems in a fraction of the time it would take without collaboration.

But another factor—perhaps more within our grasp—is equally important. When we drive down the cost of making PV modules, the price of PV power will come down as well. That goal is what moved solar researchers at NREL, along with one key partner in private industry, to a recent breakthrough in solar equipment manufacturing.

The partner is First Solar, a privately held PV module supplier based in Ohio. NREL has worked with the firm for more than a decade; their relationship is an outgrowth of the U.S. Department of Energy's (DOE) Thin Film PV Partnership Program, which is managed at the NREL National Center for Photovoltaics. NREL and First Solar haven't focused on cost reductions per se, but rather on a promising new technology involved in the manufacture of PV modules.

The technology is known as High-Rate Vapor Transport Deposition, or HRVTD. Richard J. King, who leads PV research and development activities in DOE's Solar Energy Technology Program, last year described it as "one of the most important processing advances in photovoltaics history." He went on to write that the technology "represents a critical pathway toward truly cost-competitive electricity from solar energy." (The editors of R&D Magazine agreed, and they honored HRVTD with an R&D 100 Award.)

HRVTD is used to produce a type of PV module made of cadmium telluride (CdTe) solar cells. A CdTe cell is one of several kinds made of polycrystalline thin-film materials, which are different from the crystalline silicon used in the pioneer systems of the commercial PV market. Typical CdTe modules, which measure 2 feet by 4 feet, can be linked together in PV arrays of virtually any size, from rooftop systems to utility installations larger than football fields.

A much faster and less costly process

It would be an overstatement to say HRVTD alone has enabled industry to mass-produce PV modules. In fact, high-volume production has long been deployed to manufacture other types of modules including crystalline silicon. But other manufacturers rely on labor-intensive batch processing, in which individual pieces must be handled multiple times in several different production steps. HRVTD makes possible a non-stop, continuous-feed production line that could be as much as 100 times faster than batch-processing methods; it represents the first mass-production process for CdTe modules.

It works like this: First, CdTe and cadmium sulfide (CdS) are deposited on a soda-lime glass substrate. The modules are laser-scribed and metallized, and then encapsulated in ethyl vinyl acetate and in another layer of soda lime glass. Using an automated system, a manufacturer can produce a high volume of high-quality modules. The process is becoming more reliable and less expensive as it is scaled up to higher production volumes.

First Solar has used HRVTD at its Perrysburg, Ohio, manufacturing plant since early 2002. The company is already producing PV modules in multi-megawatt volumes and selling them at less than $2.50 per watt—a very low cost for the industry as a whole. Production costs are decreasing steadily, and there could be even greater cost reductions with the second-generation production line now under construction. First Solar is pursuing a development path that could result in production costs of less than $1 per watt in high volumes.

How much will that help? Manufacturing the modules represents approximately half the cost of PV power. Other cost elements include the cost of mounting hardware and electrical components such as inverters, and labor for installation. All those elements add up to a typical "installed cost" of around $6 or more per watt today, of which roughly $3 is the cost of purchasing PV modules. Lowering PV production costs to $1 per watt or less would be a significant achievement and help to improve PV electricity's cost-competitiveness, said NREL's Ken Zweibel, a project leader who manages the Thin Film PV Partnership along with Harin Ullal and Bolko von Roedern.

Opportunities for further improvement can be found in PV conversion efficiencies. In a typical CdTe module, about 8% of the incoming sun's energy is converted to electricity. That efficiency rate could rise to 11%-13% because of design improvements demonstrated in NREL laboratories. Newer designs have a better device geometry, to capture more sunlight at the junctions between individual layers. And with further improvements, the hope is to see the kind of efficiency—about 20%—that is now achievable in copper indium gallium diselenide (CIGS) cells, for example.

R&D Magazine annually honors 100 of the year's most significant scientific and technical innovations. NREL has been the recipient (either jointly or individually) of 35 R&D 100 Awards since the early 1990s.

The most recent such honor, presented jointly to NREL and First Solar, was for the development of High-Rate Vapor Transport Deposition (HRVTD). The technology was praised for having helped to "bring alternative energies to the mainstream." PV technologies involved in DOE's Thin Film Partnership have won six R&D 100 Awards in all.

These awards are intended in part to recognize progress toward commercialization. To qualify, products must have been available for sale or licensing during the calendar year preceding the judging.

(Note: Dr. Xuanzhi Wu of NREL and other authors have published a detailed technical paper on a world-record CdTe laboratory cell efficiency of 16.5%.

A difficult but beneficial technology

"PV is a difficult technology," Zweibel said. Success is not just a matter of effective computer modeling. Instead, functional, durable semiconductors have to be designed and actually produced. Much of PV "relies on semiconductors that we essentially had to invent," he said. And commercialization relies on the ability of new, untried manufacturing processes to produce modules by the square mile.

That's why government-sponsored R&D, such as the DOE-funded work occurring at NREL, is so important, Zweibel added. Without it, private industry couldn't cover the investments needed. "Every little glitch in developing the technology would represent a high financial risk for private investors," he said. Venture capitalists are drawn to investments that promise profitability within a few years. But PV manufacturing operations might well take a decade or longer to make a profit.

Successes like HRVTD require the participation of both the public and private sectors, Zweibel said. "It only works because there is collaboration of a lot of people in a lot of places, including many NREL PV scientists."

The private companies benefit in some obvious ways. Many smaller PV manufacturers would struggle or not exist without government R&D programs. But DOE and NREL also benefit greatly from their relationship with industry, he said. "Inventing the technology is hard, but getting it to the point of commercialization is just as difficult." Like the technology development phase, the commercializing phase could take five years or more. And that role can be played only by private companies with real customers.

PV technology development is driven as much by social factors as by economics, Zweibel said. "It's not a glamorous investment. There is no dot-com type of craze with photovoltaics. No one is crying out for PV as a way to reduce electricity costs, because cheap electricity already exists. But people are beginning to care more about the environment.

"As the cost of PV-generated electricity gets closer to the cost of conventional electricity, demand for PV systems will increase dramatically. Clean energy is something that the world needs very much, and if we don't do something about it now-before the economic drivers are present-we won't have it ready when society realizes how badly we need it." 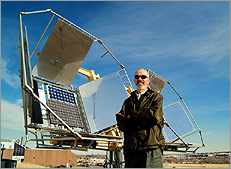 Researchers at the OTF test PV technologies like the HRVDT both before and after commercialization. The solar industry relies on OTF researchers for independent testing and evaluation of PV products.

OTF researchers use field testing and accelerated indoor testing to:

Research performed at the OTF helps industry improve PV technologies, advances our understanding of the future of PV, and contributes to NREL's mission.

To learn more about current capabilities and opportunities at the OTF, e-mail Carl Osterwald, or call him at 303-384-6764.