As I buckle my baby daughter into our car, I marvel at the possibility that her first car could be powered by hydrogen—the third most abundant element on the Earth's surface. That is, if researchers—including those at NREL—can find a safe, economical, practical way of storing hydrogen fuel on board a vehicle.

Hydrogen fuels can allow us to shift the energy requirements for transportation from imported oil to diverse, domestically available resources. In President Bush's 2003 State of the Union address, he proposed $1.2 billion in research funding so America can lead the world in developing clean, hydrogen-powered automobiles.

"With a new national commitment," the President said, "our scientists and engineers will overcome obstacles to taking these cars from laboratory to showroom so that the first car driven by a child born today could be powered by hydrogen and pollution-free." 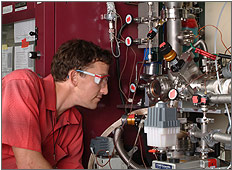 This effort, known as the FreedomCAR and Fuel Initiative, includes finding a hydrogen storage technology that can carry enough hydrogen on board a vehicle for at least 300 miles. NREL scientists Mike Heben, Anne Dillon, and others are among those who are leading the charge to harness hydrogen and find clean, economical ways to store it—both for use in the transportation industry and for electricity production.

Heben has spent 11 of his 13 years at NREL in the Center for Basic Sciences working on various hydrogen research projects funded by the Department of Energy's (DOE) Office of Energy Efficiency and Renewable Energy (EERE) and Office of Science.

"Hydrogen storage has been studied for 40 to 50 years," says Heben, team leader for NREL's nanostructured materials group. "But it's just been in the last five years that people are digging deeper into the problem to understand its fundamental basis."

The Challenges of Hydrogen Storage

The real challenge of hydrogen storage is finding a way to store enough of it to make it worthwhile—enough to fuel a vehicle for its required driving range, within the constraints of weight, volume, efficiency, and cost. Current technologies—and their downsides—include these:

Heben explains that hydrogen is a poorly compressing, low-density gas. "It's difficult to liquefy," he says. "You can compress it into gas cylinders. Or you can use a material that can soak up the hydrogen like a sponge. You also need a 'black box' that is small, lightweight, and provides a high concentration of hydrogen to the weight of the storage material."

The black box also needs to be on board the vehicle, providing sufficient fuel to travel a range of 300 miles on a single "tank"—without sacrificing space, lifestyle or price. The primary goal is to get the largest amount of hydrogen into the smallest volume.

Yet another important feature, Heben explains, is the ability to put hydrogen in this black box and take it out again without expending too much energy. And, as if that wasn't a tall enough order, "it also has to be inexpensive, not too sensitive to impurities, and safe," he adds.

Three Approaches to a Storage Solution 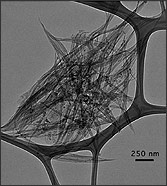 Carbon nanotubes are able to store up to 8% weight hydrogen in small samples.

Carbon Nanotubes Are One Possibility

At NREL, researchers are looking into reversible chemical storage materials, including carbon-containing materials such as carbon nanotubes—tiny, lightweight carbon cylinders, each having a diameter equal to several hydrogen molecules. Heben, Dillon, and other NREL scientists have shown that hydrogen may be drawn up into these carbon tubes just as water is drawn up into a drinking straw. So, they are working on fabricating bundles of aligned nanotubes. These would essentially be lightweight hydrogen "sponges," ideal for a vehicular hydrogen storage system.

George Sverdrup, Technology Manager for NREL's Hydrogen, Fuel Cells and Infrastructure Technologies program, says one challenge that's come up in the world of hydrogen storage research involves NREL's research results. "Our results suggest that hydrogen can be stored at many times the volume that people believed it could be," says Sverdrup. "Why? It's important to find out." Heben says that NREL's initial work has spurred others to work on this question.

Besides carbon nanotubes, NREL researchers are also working on other nanostructured carbons and carbon/metal hybrid materials, doing work in the chemical hydrides area, and modeling how a storage system would work in a vehicle. Overall, NREL is developing a substantial capability in the area of hydrogen storage R&D.

Responding to the Grand Challenge

It's not surprising that DOE has identified storage as the top technical barrier to hydrogen's future in the transportation market. Current limitations in hydrogen production and fuel cell technologies are likely to be solved through incremental or evolutionary improvements. But meeting the storage challenge will require revolutionary improvements and breakthroughs.

In July 2003, DOE issued a "Grand Challenge" to the scientific community to solicit applications for RD&D of hydrogen storage materials and technologies. These solicitations will provide up to $150 million in funds over five years (subject to congressional appropriations) for research and development to support the President's Hydrogen Fuel Initiative.

This year, DOE asked NREL to establish capabilities to implement hydrogen systems integration within DOE's Hydrogen Program. NREL has posted a new position to establish and manage a systems integration capability that will deliver independent and objective analyses, advice, and planning options to support DOE's EERE in making informed program decisions. The capability will initially focus on supporting DOE in accomplishing the objectives of the President's Hydrogen Fuel Initiative, but it will be expanded to address other programs over the next five years. For more information, visit NREL jobs.

Hydrogen Research Extends Across the Lab

In addition to hydrogen storage, NREL researchers and analysts are also focusing their efforts on hydrogen production and delivery, codes and standards, fuel cells, and vehicle and hydrogen infrastructure analysis. "Our hydrogen research really cuts across all of the Lab and everything we do," says Sue Hock, director of NREL's Center for Electric & Hydrogen Technologies and Systems. "There is no one clear path to the hydrogen vision. The answer will be in a diversity of solutions.

"Hydrogen research is very important for renewables," she adds. "We have a real opportunity for NREL in all of our renewable technologies." For example, both wind and photovoltaic systems can be used to create hydrogen. NREL scientists are also producing hydrogen from biomass.

"Hydrogen production in the future will likely come from a mix of resources and technologies in order to have enough to sustain a hydrogen economy," adds Sverdrup. "But producing hydrogen from renewable resources offers an environmentally friendly alternative. You can split water, use algae, wind or sun to make hydrogen. We've got the promise of using renewables to operate fuel for our economy." Currently, hydrogen is produced from natural gas.

"The most exciting thing about our hydrogen research is that it can open up markets for intermittent power technologies, such as those coming from wind and solar resources that fluctuate," says Hock. "On the utility grid, we're limited by intermittent technologies, so combining the use of hydrogen and renewable power from solar or wind is a great marriage between the two. The use of hydrogen also opens up the transportation market to photovoltaics and wind power."

Learn more about the technology

Systems Integration: Putting It All Together

"In order to get to a hydrogen economy, we also need the infrastructure in place to produce, use and store hydrogen," says Sverdrup. "There are dozens of people involved in hydrogen research and leadership at NREL spanning across almost all of the Lab's research centers. Understanding all the resources and knowledge we have here, then matching those resources to the rapidly expanding program at DOE is an exciting challenge."

NREL's Hydrogen Technologies & Systems group is leading the challenge of integrating hydrogen with renewable energy systems. "We're helping to coordinate and lead all the hydrogen research here at NREL," says Carolyn Elam, hydrogen production task lead. "We're the only national lab within DOE's EERE program that's been doing this for a while."

"Our hydrogen program has been here for 25 years, so it's not new to us," says Elam. "It's just that people are listening more now. The Hydrogen Fuel Initiative has helped us to be recognized for the work we've been doing all along."

Heben and others agree that DOE's still-new program will do nothing but benefit hydrogen research. "Previously, we were rummaging around to see what we had that would work. Now that DOE is focusing additional resources on this, we're developing deeper insights; we can fund people over longer periods, allowing us to have beneficial learning cycles."

Hock agrees. "We used to have a smorgasbord of projects," she says. "Often, it was difficult to see forward movement. But now with DOE's coordinated efforts, we have the ability to focus on long-term goals and intermediate steps to get to a hydrogen economy. The program is looking globally now, and we can see where the biggest technical challenges are."

Sverdrup summarizes the benefits of moving towards a hydrogen economy: "First, we can use hydrogen to decrease our dependence on imported petroleum, because it can be produced by a variety of domestic resources, including water and biomass," he says.

"Second, hydrogen can be a cleaner energy carrier than petroleum. But since pure hydrogen does not occur naturally as a liquid, it needs to be extracted from its natural state. If it comes from coal or natural gas, the remaining carbon needs to be captured and sequestered or used for another purpose in order to limit emissions of greenhouse gases into the atmosphere.

"But I think the most exciting thing about NREL's hydrogen research is uncovering the science behind an energy carrier—hydrogen—that can benefit the whole country with resources that we already have," says Sverdrup.

No matter which aspect of hydrogen is being researched or analyzed, NREL researchers agree that it's an exciting time to be working on hydrogen. "It's great having a chance to do science and puzzle-solving on things that will hopefully benefit mankind," says Heben. "It's one of the few places in the country where you can do this kind of work. I believe in the promise of this ... and I think it deserves to be investigated."