We have integrated an SPM system inside an electron microscope to create a platform of new capabilities. These capabilities allow better-controlled manipulation of nanostructures or selection of an area for high-precision observation. This platform is compatible with a helium closed-circuit cryostat and fully accessible to the optics of cathodoluminescence (CL) detectors.

The scanning probe platform is based on a nanopositioning system with closed-feedback electronics for higher accuracy. An assembly of high thermal conductivity copper braids coupled to a low-vibration closed-circuit cryostat provides variable temperature (50-300 K). Modes of operation include scanning tunneling microscopy (STM) and atomic force microscopy (AFM). Force sensors are based on self-sensing and self-actuating piezoelectric tuning forks.

We have developed four innovative modes of operation combining SPM and electron microscopy.

Scanning tunneling luminescence (STL) assesses nanostructures. Based on STM, luminescence is stimulated by recombination of tunneling electrons. In conductors, the observed emission is caused by deexcitation of surface plasmons (SPs) — collective oscillations of free electrons. In semiconductors, photons are emitted by recombination of electrons with available holes or vice versa (unipolar conditions) or by impact ionization (bipolar conditions), depending on the voltage applied to the tip. Photon maps with unprecedented resolution have been obtained when synchronizing the scanning of the tip with the detection of the luminescence. As a proof of principle, we have resolved individual quantum dots of 2-5 nm in diameter by using STL.

Lateral transport is used for investigating grain boundaries. Based on a combination of STM and SEM, electrons (holes) excited by the electron beam at specific locations are detected through the STM tip allowing lateral electron diffusion to be measured.

Electroluminescence (EL) mapping assesses diodes. Based on conductive atomic force microscopy, EL applies an external bias to cause individually injected current pulses to be visible during intermittent contact of the oscillating and conducting tip. It follows that EL can be stimulated by this current during the contact cycle. Maps of the EL and current can be acquired simultaneously. Acquisition of the local L-V characteristic and EL spectrum are possible.

Near-field cathodoluminescence is designed to be a surface-sensitive CL based on near-field scanning optical microscopy. The luminescence is excited by the electron beam and detected through the optical fiber positioned in the near field. 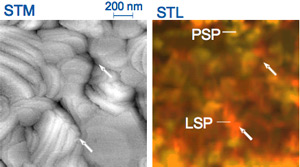 Gold substrate: (Left) STM image reveals the terraces of the H2 flamed substrate. (Right) Corresponding STL map of the SP emission. The color represents the contribution of the localized (red) and propagating (green) SPs to the overall STL. 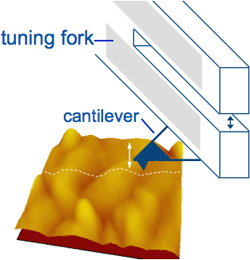 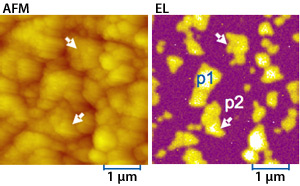 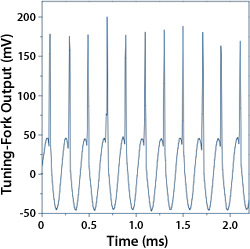