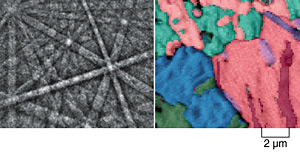 NREL has found electron backscattered diffraction (EBSD) to be a valuable tool for assessing crystalline specimens.

EBSD generates maps of the orientation of crystalline phases and can be used to investigate misorientation between grain boundaries, texture, grain distribution, deformation, strain, and other properties. The ultimate resolution of EBSD is about 10-20 nm.