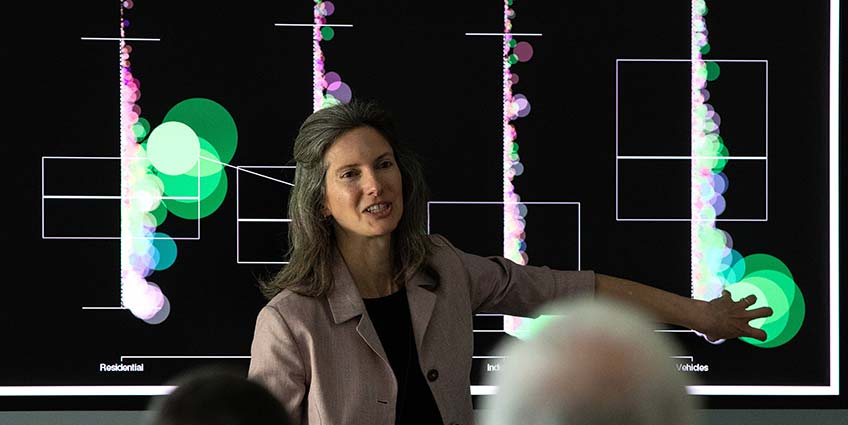 Urban planners have not historically dealt in energy issues, yet a focus on clean energy is increasing around the world, and urban planners’ role in energy transitions is evolving as demand increases. Megan Day, one member of a growing cohort of urban and regional planners working at NREL, said she believes urban planners are uniquely suited to provide the technical assistance required to apply integrated energy solutions within local jurisdictions.

Day and her colleague Alison Holm have nearly two decades of urban planning experience. Their role is expanding as cities, states, and tribes deploy renewable energy systems and set ambitious clean energy goals. Read more about how they are examining land-use systems and energy systems in a holistic way.

As distributed energy systems continue to expand and evolve, the need for secure and private communications networks is increasing to ensure reliable utility operations and network security.

Recognizing this need, NREL is partnering with pdvWireless (PDV) to analyze the performance of private LTE broadband networks and to develop innovative approaches to enhance the reliability, security, and resilience of distributed energy systems. The goal of the collaboration is to advance the capability to evaluate the combined performance of an advanced distribution management system (ADMS) and network communications system. Specifically, the project team hopes to identify opportunities for private LTE networks to serve as enhanced communications layers for real-time monitoring and active control of ADMS, which are essential for today’s evolving, modern grid.

ESIF Laboratory Program Manager Martha Symko-Davies emphasized how the project aligns with NREL’s goal to develop innovative technologies that can facilitate ADMS deployment. “While the goal for NREL is to validate the capabilities of telecommunications as an enhanced layer for real-time communications, PDV is looking more specifically at using private LTE wireless network technology within a specific band. NREL and PDV will work together to achieve these goals,” she said. “Our partnership with PDV will help inform the energy sector of the effectiveness of an ADMS using a private broadband network enabled by LTE technology.”

The team hopes that results of this proof-of-concept evaluation will provide guidance for utilities on the combined performance of an ADMS and communications system when operating on a private LTE network. Read the news release on this partnership to learn more.

Q&A with Annabelle Pratt: Managing Energy at All Scales

Annabelle Pratt is a principal engineer for the Power Systems Engineering Center at NREL. Pratt specializes in microgrid and home energy management systems, and her work has included the evaluation of microgrid controllers and advanced distribution management systems. We sat down with Pratt to learn more about her work and the newest research in these areas.

Get the FY 2018 Highlights on High-Performance Computing at NREL

High-performance computing research at NREL had a banner year in Fiscal Year 2018. Advances toward exascale computing, solutions to engineer lighter-weight vehicles, and improvements in planning tools to integrate renewables into the electric power system are only a few of the notable projects that used NREL’s supercomputing systems.

Read about this exciting work and much more in the HPC annual report.

Powering Our Research with Microgrids

NREL researchers have been involved in the modeling, development, evaluation, and deployment of microgrids since 2001. With respect to the larger grid, a microgrid is a group of interconnected loads and distributed energy resources that acts as a single controllable entity. Microgrids can connect to the larger grid or, in cases of natural disaster or cyberattack, can disconnect and act as energy islands.

NREL is collaborating with five other national laboratories on the Grid Modernization Laboratory Consortium project called Multi-Scale Integration of Control Systems. The goal of this project is to create an integrated grid management framework to allow energy management systems (EMS), distribution management systems (DMS), and building management systems (BMS) to work together seamlessly. The 3-year project started in 2016 and has been developing and demonstrating an open framework to coordinate EMS, DMS, and BMS operations across national labs. As part of this project, NREL researchers successfully integrated a DMS at NREL with an EMS and BMS at the Pacific Northwest National Laboratory (PNNL). Working closely with PNNL, the team defined the communications structure for the EMS-DMS-BMS link and tested the information exchange among the systems.

Combining these systems will allow researchers at NREL, PNNL, and other national labs to do more in the future with research, including developing algorithms or creating a platform to test new technology related to next-generation grid control systems. New applications will also be added that will transform or extend the EMS and BMS capabilities, such as probabilistic risk-based operations, forecasting data integration, and decision support. The Multi-Scale Integration of Control Systems project is set to be completed in April 2019.

Concentrating solar power (CSP) could play an increasingly significant role in generating electricity in the contiguous United States by 2050 if the technology’s levelized cost of electricity can be reduced to DOE’s 2030 solar cost targets. In The Potential Role of Concentrating Solar Power within the Context of DOE’s 2030 Solar Cost Targets report, NREL researchers modeled generation mixes in the United States out to 2050 for a range of scenarios, starting with a baseline scenario that assumes business-as-usual trends in technology costs. In all the scenarios, PV plays an increasing role, whereas the role of CSP with thermal energy storage (CSP-TES) expands if the 2030 cost targets are realized. Across the main set of scenarios in which the 2030 CSP cost target is achieved, CSP-TES accounts for 1% to 10% of total installed capacity in 2050. And because of the high capacity factor of CSP-TES plants deployed in these scenarios, between 3% and 16% of electricity generation is delivered by CSP plants in 2050.

The California Energy Commission’s final project report on Borrego Springs: California’s First Renewable Energy-Based Community Microgrid was published this month. This project was selected in 2016 as a High Impact Project for the ESIF and has played a significant role for NREL research and development. The goal of this collaboration between NREL and San Diego Gas & Electric Company (SDG&E) was to model SDG&E’s utility microgrid in Borrego Springs and evaluate how a microgrid controller with advanced functionality would perform for the utility microgrid. The project team successfully accomplished most of its desired results, including effectively developing a system to island the Borrego Springs community and eliminate much of its vulnerability to interruptions of the electric grid.

Utility-scale solar PV power plants are sometimes curtailed, but this power is not energy lost. Curtailed power that is otherwise lost can be used instead to provide grid reliability and stability services. The new paper Highly Accurate Method for Real-Time Active Power Reserve Estimation for Utility-Scale Photovoltaic Power Plants, by NREL’s Vahan Gevorgian suggests a new method for estimating active power reserves for curtailed PV power plants, a method that is highly accurate and easily deployable to PV plants with any type of smart inverters and PV modules.

Gevorgian’s research marks a breakthrough in potential available power estimation, producing more accurate estimations with no costly retrofits and less programming and processing than existing techniques. A notable success of the method is that it does not require any further equipment or sensors; all of the measurements are taken by dedicated inverters within the plant as reference units, which require limited extra programming.

The paper was selected as Best Paper at the 8th International Workshop on Integration of Solar Power into Power Systems in Stockholm. Future work includes a collaboration with First Solar to validate the model on a utility-scale PV power plant at the National Wind Technology Center and large, multi-hundred-megawatt commercial PV plants being developed by First Solar.

An Introduction to Grid Services: Concepts, Technical Requirements, and Provision from Wind

The role of wind power plants has expanded from being simply energy generators to include active participation in grid services. Although wind power's ability to perform essential reliability services (ERSs) to the grid is appreciated, the economics and regulation of grid services are less understood and vary across the U.S. electric power system. This technical report—authored by Paul Denholm, Yinong Sun, and Trieu Mai—reports on the variety of essential reliability services, quantities currently procured across regions, and estimates of costs. The study finds that ERSs are a relatively inexpensive but critical part of system operation. Additionally, future energy markets might motivate economic interest in precurtailing to provide ERSs.

The uncertain nature of wind creates challenges for integrating wind power: Without knowing the resource's supply days or even minutes ahead, it is difficult to predict the output of a wind power plant. This article, published in Applied Energy, proposes a probabilistic wind forecasting method to quantify and reduce uncertainty in wind power generation. The method considers a set of deterministic forecasts generated by a machine learning-based forecaster called M3. Then the standard deviation of the predictive distribution is estimated by a support vector regression surrogate model, and, finally, probabilistic forecasts are generated from the predictive distribution. The forecasts were compared against historical data, with the Laplace distribution type showing the best results in reducing uncertainty.

"Solar-Plus-Storage Economics: What Works Where, and Why?"

This broadly focused article published in The Electricity Journal answers major questions for commercial solar-plus-storage markets. With NREL's REopt™ modeling tool, the research team projected the economics of solar-plus-storage projects for locations across the United States. The modeling accounted for technology costs, utility rate structures, building load profiles, and policies/incentives on commercial-scale solar and storage projects. Ultimately, the work finds that technology costs and utility rates are the main drivers of economic viability and that building load size is the most important factor in determining solar-plus-storage size.